I’d been wanting to do a multi-day touring trip for some time and the Tonquin Valley sounded like the perfect destination: amazing mountains and relatively low avalanche danger. All I needed was some company.

I mentioned the trip to Jérémy and Ingmar but neither sounded overly keen. A week or so later — to my surprise — Jérémy said he was in! I think this gave Ingmar the confidence to come along too as we now had someone with a decent knowledge of avalanche hazards and assessment. I procrastinated when I got home, reading a few chapters of Miracle in the Andes (quite a riveting book), and then finally set about packing. I created a gear list and sent it around before heading to bed, trying to pack as light as possible to make sure I’d enjoy the trip.

I was up early, finished packing, had breakfast, and was off. I headed across town to catch the bus. On the way Charlie spotted me and ended up giving me a lift to the hill. We parked in his reserved parking and I plodded down to Boot Up to await the others. The others were a little worried when I hadn’t been on the bus, but their fears were quickly alleviated when they saw me. They got their boots on quickly and were ready before I knew it!

Jérémy asked Ingmar if he really needed to bring an additional coat — Ingmar’s pack was already quite heave with a camera, two lenses and tripod — but being sponsored he wanted photos with particular gear. While the others were discussing the route with Courtnall I headed to the bathroom and then we were off.

I thought it quite serendipitous that our chair number on the CRE was 42 — my Sierra number at work.

Across Basin Traverse, up the Knob Chair and we were soon strapping our skis to our packs (or simply carrying them in Jérémy’s case) and hiking up Marmot Peak. I took a photo for a German tourist, and he returned the favour. A short way down the other side and we had our skis on and were dropping down to Marmot Pass. When planning the trip, I figured it made sense to drop into Portal Creek from here, as it would save us some skinning, and more importantly give us some more skiing, which turned out to be fantastic. The best skiing of the trip!

We crossed over Circus Creek and were soon following Portal up, admiring some ice flows high on the right. As we passed Peveril Peak (slight chance of slides here) the valley opened. The skin tracks we had been following ended in a snow camp.

Jérémy pressed onwards, breaking trail. It was sunny and hot.

I got to lead as we continued up the valley, through Maccarib Pass and then instead of following the summer route, we headed south skinning up a steep face to the col between Maccarib and Clitheroe (I think this used to be called Freds Pass, but Parks deemed it dangerous, and so the name was removed from maps). In the bowl just to our right was a size 2 slab avalanche. It looked like the crown was about 2m.

Jérémy helped Ingmar with his pack making some amusing sounds as he struggled up.

The weather was beginning to turn; earlier than what the forecast had predicted. As we gained the pass I got my first views down into the Tonquin. We gazed down at the sections of the Ramparts peeking out from the now cloudy skies. It would have been nice if they were a little less hidden. I skin-skied down the first lip in an attempt to find shelter from the wind. I didn’t do it very well and plummeted forward over my skies as they bit into the snow, landing in a confused pile. Laughing at myself I struggled up and got ready for the ski down.

It wasn’t great skiing, there was a thick crust making it hard to turn. Probably a combination of the sun during the day, and now the winds.

As we reached tree-line, the skiing was better but still not great.

Jérémy and I grabbed some of Ingmar’s camera gear and we pushed on picking up a winter trail at the end of Amethyst Lakes (just after finding a summer reflector). We skied down the creek and ended up skinning back towards the ACC cabin.

There were spectacular mountains all around us. The 1.5km to the hut seemed to drag on quite some time, but then, quite abruptly it stood in front of us. Skis from another group were standing upright and smoke could be seen wafting from the chimney. 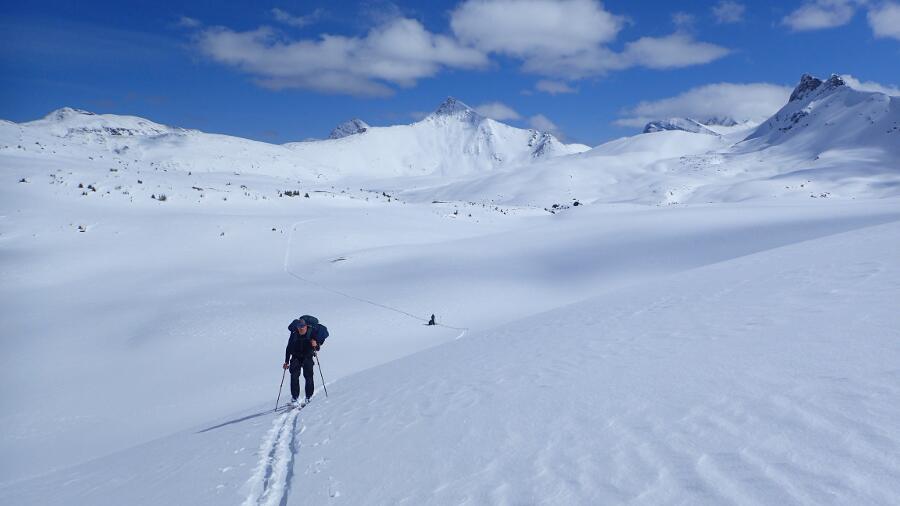 It was quite late now. After removing my skins I headed inside, dumped my pack and took my boots off. Then I guzzled some water from the pot on the stove as I definitely hadn’t drunk enough.

The other group of four had already been here several days, but the weather had been pretty socked in so this had been the first day they’d had a more lengthy trip. They were from Prince George, and Jérémy knew one of them from an Avy course. (I think they had adventured up on the Frazer Glacier).

I started making dinner. We had a half game of Cribbage and then hit the sack. Believing the hut pricing to be a little exorbitant (in summer if fully booked it’d be over $1000/night), I slept outside in my bivy bag.

The other group walked past at around 8am — they were going to attempt to ski a couloir on the Ramparts.

I rose a little later and was surprised I was the first up. I spent some time collecting and melting snow before Jérémy and then Ingmar arose.

We weren’t in a rush and had quite a lazy morning throwing a few ideas around before deciding to spend the rest of the day skiing in the valley around the hut. It was nice to have lighter packs, and Ingmar was happy to finally get some shots with his fancy camera. My favourite run of the day was the final one down to Outpost Lake. I wove my way down around the large boulders doing a couple of small jumps into the soft pillows and then chilled on the lake watching the others make their way down.

We were back before the other group. Having forgot food, I was starving and set about making a meal. Ingmar split some wood. Snow was melted and soon we were playing cards.

We had another game of Cribbage (this time a full one), and then started playing Yaniv, having three of the best rounds I’ve played in a while. (We won a game each. In one game we had a three way draw!)

We rose early the next morning. I wanted to see if we could find a small cave below the hut, but I was out-voted. A little annoying seeing as I’d got a permit from Parks and it had been one of the places I wanted to visit on the trip. The views on the way out were much better than the Portal entrance. My favourite peak was probably Blackhorn with its pointy spire.

It was downhill most of the way and we made good time following the snow covered Astoria. As we continued the river began to reveal itself, while still allowing us to cross over it via snow bridges.

As it gained momentum and widened we had to stick to its banks. As the trail began to climb up to the hostel, I was convinced we’d need our skins, but the snow turned out to be so sticky that we made it all the way to Cavell Lake!

We rested there for a while admiring the views and stopped again shortly later at the hostel. 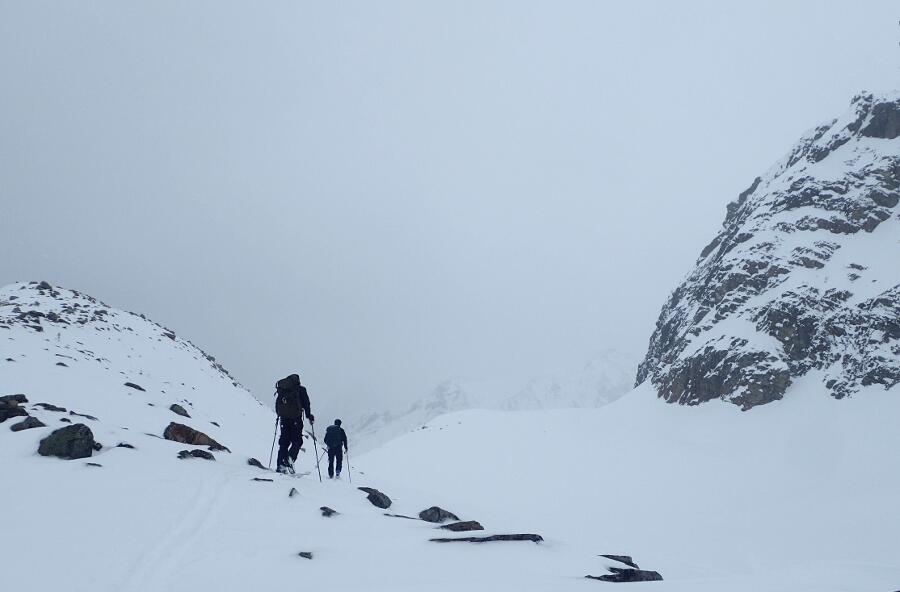 Seeing as we’d made good time, we decided a trip to Angel Glacier (further up the road) was in order. The weather had other plans however and the mountain was now shrouded in cloud and the temperature had dropped. We decided we’d just head down and finish a little early.

We passed a few people heading up and were soon at the parking lot. We headed back up to the hill to dump our ski gear and then headed home to shower, eat and rest. What a great trip! 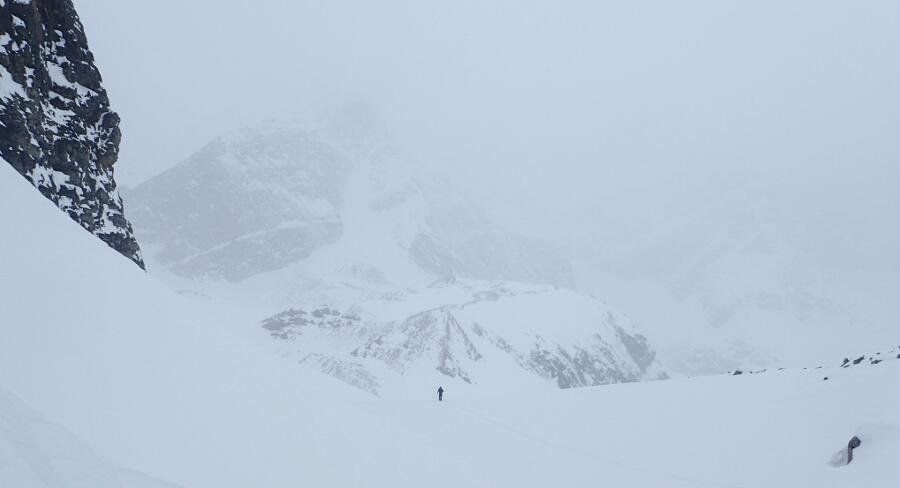 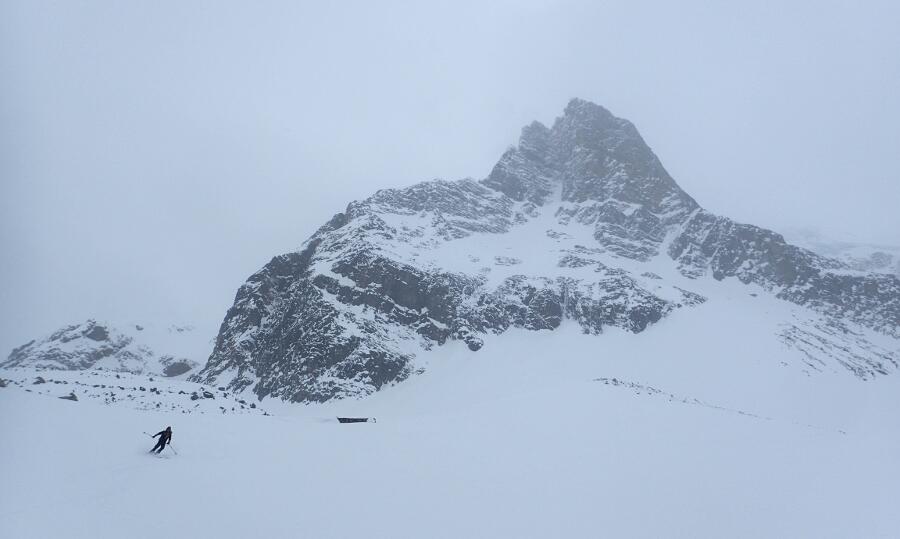 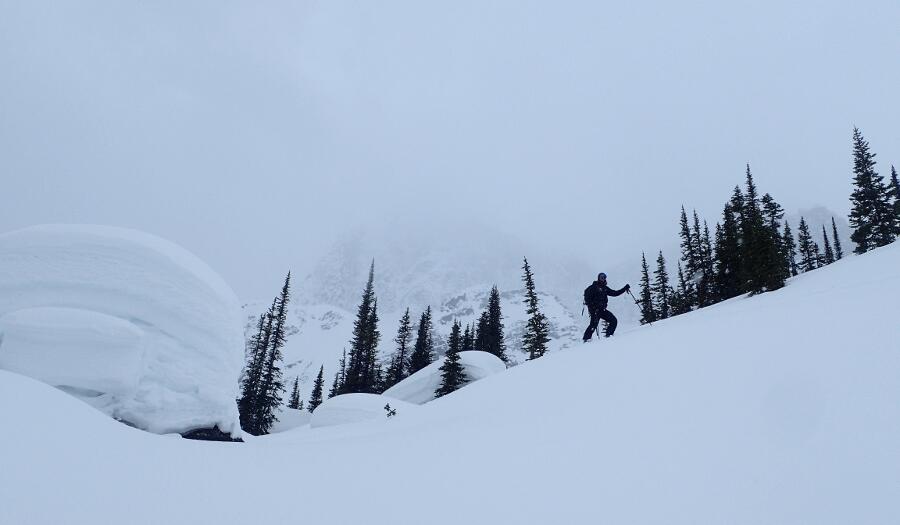 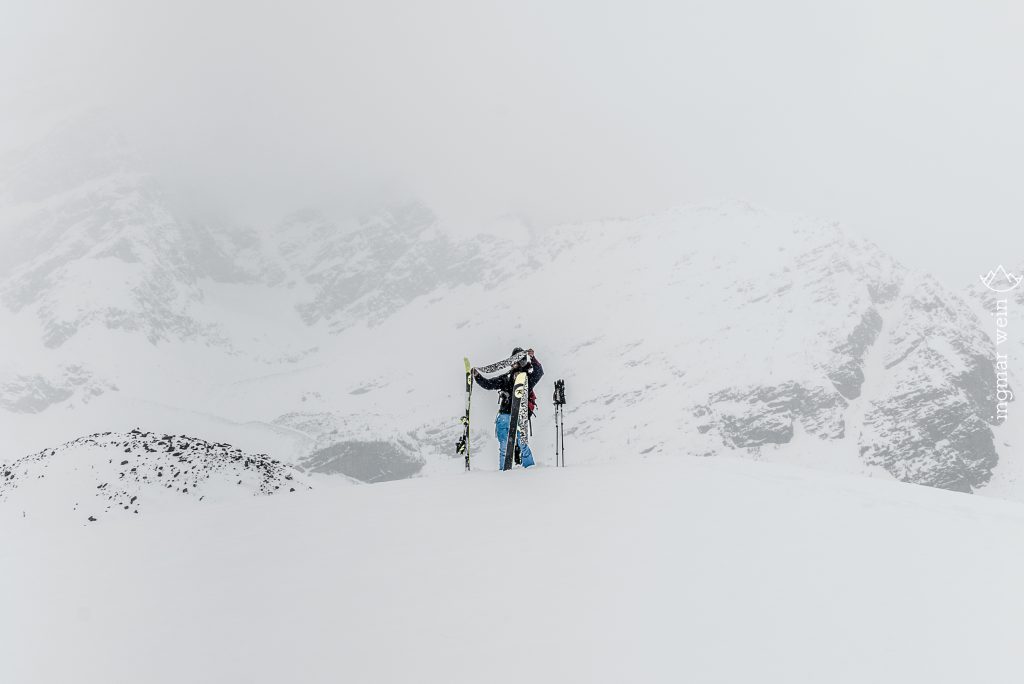 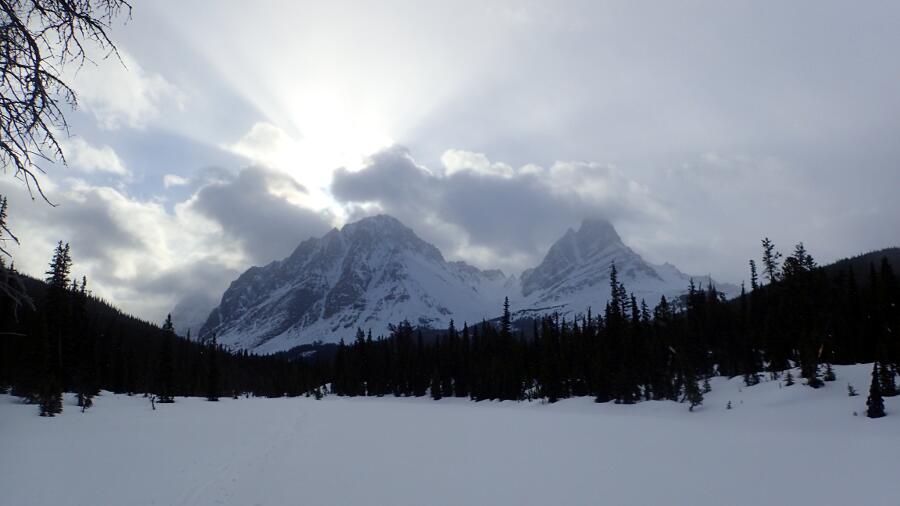