In recent years the period around New Years has been an opportunity for members of the Sydney Uni Bushwalkers to go canyoning near Glen Davis, and there was plenty of keen participants again this year.

Meeting up at the campsite in the morning, we were soon off on the first leg of T2’s 5 day exploration loop. Heading up a lovely creek was a great way to start the trip. There were lots of native plants to snack on – like dianella and wild raspberries. I had a scary fall when a large rock I was on came loose. Thankfully I didn’t get hurt and no one else was around to see it.

Dumping packs at a small tributary, we bounded up to explore the hopeful constrictions. We were in luck and enjoyed a very nice canyon with a fantastic column in the side of the canyon wall. We explored further up, but it wasn’t much more than a scrubby creek further on. The next side creek also had some nice canyon. We had to relay some logs up to make reversing it a bit easier. This canyon was also quite nice, and unfortunately short lived. Navigating by counting the tributaries as we went, we turned off when our count reached six. After another section of canyon we exited up onto the ridge and — after returning to find my lost camera — enjoyed the views from a lookout.

The ridge provided surprisingly easy walking and we made good time before dropping into the next creek. After a quick snack we decided to continue up to our high camp. A small cliff required us to pass packs, but we were soon at what I think would be my favourite high camp thus far. We set up on the scenic rock ledge and lit a small campfire in a slightly more sheltered spot just below. As I lay down looking up at the dark sky, I repeated my mantra that it would not rain. I was woken up by one light shower which thankfully only lasted about five minutes, but it left me wondering what price I would have to pay if it really came down.

Everyone slept in, except Kshitij, and it was fairly late by the time we hoisted our packs onto our backs. Thankfully they were much lighter today, as we were exploring a nearby creek and then returning to the same camp.

We dropped down into the creek, but while it closed in slightly in places it never became a canyon. Exploring up a side side creek, T2 declared after a final push that it wasn’t worth going any further. Josh and more notably Kosta were not at all pleased by the mornings ‘canyoning’.

Lower down in our next creek I had a look up a side branch and found a small amount of canyon, but it was guarded by a death adder – I decided to report back without checking it out properly. The next creek was much more like a rainforest. Again it didn’t really canyon, but was beautiful nevertheless.

After meeting back up with Joshua, we returned to the canyon guarded by the death adder. It was very short, but there was a nice overhang at the end. Josh tested the acoustics with an improvised death adder song. We had to be careful on the way back as the death adder had moved and we had no idea where he was hiding. Back at camp we reclined on the rock, enjoying the sunshine, views and interesting shapes formed by the clouds. Some of T2’s lucky butterflies flew by, telling us we would be heading in the right direction tomorrow.

But the appearance of a rainbow, along with more ominous clouds, made me forsake my “no rain” mantra and instead retreat to a small overhang for the night. I breakfasted on my private ledge and, after packing, headed up to join the others who were mostly up and about. We carefully made our way down death adder pass. I was very pleased when Kshitij discovered what turned out to be a wild passionfruit. I ate it with glee and also picked a few more from the vine for later, hoping they would ripen (they didn’t — not that I needed more food!).

Continuing further down, we headed up a creek we hadn’t explored yet. We had almost given up on finding anything, but I decided to push on for another minute. After squeezing through a small hole I gave three loud cooees — letting the others know something of importance had been found. There were a number of fun scrambles in this terrific winding canyon. We made it as far as a waterfall that blocked our way, but it appeared like the canyon had topped out anyway. We headed back down to the main creek, continuing further along to find a spot to camp.

After startling a red belly black snake into the bushes, a second fled into the water, while a third did not seem to notice us and went on slithering around the sandy beach we had chosen to camp on. It was quite interesting watching it foraging for food, dipping its head into small indents on the ground. It eventually noticed us, flattening its head to let us know, then promptly quietly vanished.. Dumping our packs, we headed up another creek, soon finding the opening of a great looking canyon. In a fit of canyon fever, Joshua bounded ahead, scrambling up some tricky climbs. Bron sensibly commented that the way up looked quite hard. Sure enough, when Joshua decided he could go no further and came to turn around – he realised it couldn’t be safely down-climbed. I climbed up outside the canyon and onto a ledge that would bring me higher into the canyon. Doing a half slide, half jump, I made it into a pool where I was able to drop a rope Joshua. After a small climb and tricky traverse I discovered a sling that could be used to anchor a handline. Joshua and I headed back to rejoin the others who were looking for a pass up through the cliffs so that we could properly explore this canyon from the top.

Kosta located a scary ledge traverse, which T2 was coaxing Bron across when we arrived. It was followed by another short climb. Skirting the base of the upper cliffs, we passed an impressive amphitheatre and dropped back into our target creek. Bashing downstream the creek started dropping and we were soon abseiling into a fantastic constriction. This was definitely my favourite canyon so far.

It was very late by the time we were finished, but thankfully our campsite was nearby. It took just seconds to get a fire alight, so by the time the others came around the corner the flicker of flames was already there to welcome them. We made hot chocolate with real dark chocolate (Thanks T2) and the surplus milk powder I had been carrying around. 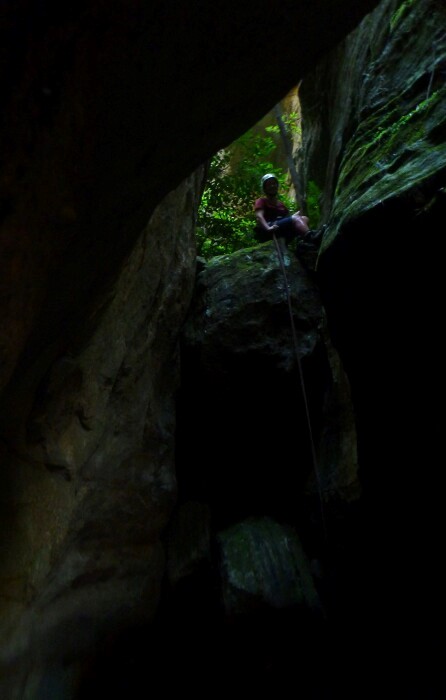 We slept out in the open on the sandy beach, and everyone awoke to a layer of dew on their sleeping bags. Joshua wasn’t keen to get up, preferring to snooze, so we tried to coax him up by threatening to steal his beloved e-cigarette. He feigned deafness, and quickly rolled over to secure his precious within the confines of his sleeping bag.

We left Joshua at camp and headed off for the next creek we intended to explore. Our pass up the neighbouring ridge required an easy rock climb up a 10m cliff, which Kosta top-belayed.

As we pushed through scrub, a variation of Waltzing Matilda stuck in my head:

Josh the magic dra-gon, puffed on his ci-ga-rette,
of the mint fla-voured el-lec-tric kind.
And he puffed as he walked, puffed as he climbed,
Sear-ching for the can-yon that we would find.

Suddenly, Kshitij exclaimed: “Wow! How did you miss that?”
“What? a snake?”
“There’s two!”

Slightly confused about why he was moving closer to the snakes, I headed over. It turned out he’d spotted a huge echidna that was so large it looked like two snuggling together.

Soon we dropped into the creek, following it down a short way to the beginnings of a canyon. I wasn’t overly impressed by this canyon. The constriction was certainly sustained, but I didn’t find it overly aesthetic as there wasn’t really a lot of sculpturing of the rock walls or greenery. Others in the group, particularly T2 and Bron, quite liked it. Back at camp our sleeping bags had dried out, so after eating lunch we packed our bags and continued towards our next objective.

We found a nice section of rain forest with space to camp, so we left our gear here and headed off up another ridge. This one was very open walking, meaning Kosta didn’t get a chance to use his favourite German-accented quote of the trip: “I hate scrub!”

The lack of scrub may have been due to a change in the soil type as there was a notable change in vegetation. There was a lot of short tussock grass, some kind of eucalyptus we hadn’t seen much of and up a little higher some ironbarks.

We dropped into a creek which quickly narrowed into a canyon. After two short abseils, the floor of the canyon dropped away, disappearing at least 15 metres below us. The canyon was very nice and narrow here, with a tricky start on the abseil for added fun. 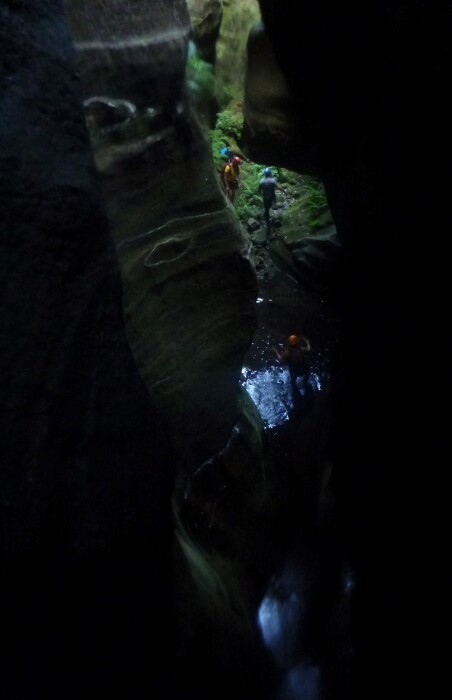 After a couple hand-over-hands we came to another abseil which ended in a large room where I found the others examining some animal bones. The chamber then constricted and we had a cold swim — possibly the first of the trip — before some more climb-downs. This section was nice and green, an excellent canyon. When I woke the next morning, I was welcomed by the site of Joshua creating clouds of smoke above him. We breakfasted before breaking camp and continuing upstream. At first we followed a pleasant creek, but as we continued it got increasingly scrubby and hot.

Crossing over a saddle we followed another creek downstream. This one was much nicer walking and included another great section of canyon. In one particularly deep chamber, a few people decided to take advantage of the acoustics with an impressive rendition of Silent Night, forgetting Kosta’s hatred of Christmas carols.

Where the creek ended, plunging through the cliffs above the Capertee River, there looked to be some great abseils. We decided to save time by bypassing these drops by following a ledge and going down a spur that T2 had heard provided a good pass. We were soon at the Coorongooba campground were we met up with other members of the club who were out here to join in the New Years festivities and join us for a couple more days of adventure.