After meeting up with Scott, and grabbing a rope, we headed to the old bridge over Río La Vieja to spend the the night. It was after midnight by the time we hit the sack, and morning came all too early.

The original plan was to rap off the bridge – we’d even planned the anchors the night before. The idea was to check out the flow by reversing the cañón, and if all looked good, drop in again by the route pionered by the Toros Canyoning Team… However, in the morning the weather looked supprisingly stable, and peering down into the cañón below, the water looked quite calm. We decided to go for it! We could make a final call at the first waterfall cautioned in the Toros beta.

Leaving the car at the bridge, we headed up the road to the dairy farm. Apart from a dog, no one seemed to be home. This was good, as apparently they had caused trouble with access in the past. We let ourselves in through the gate to the cow poo diarrea path… I mean yellow brick road… that led through the fields to the drop in. To keep us on path, it was lined with electric fences, which, as Fernando can attest to, were certainly live!

Squelching our way down the path, we were soon walking on grass. Trying some very bitter oranges we dropped into the bosque and followed the ridge down to the stream.

After a small slip, we were peering down the first waterfall. The flow didn’t seem high at all!, and we were both happy to green light the descent into the Emerald City (which Danielle had named with the Wizard of Oz in mind – not Ciudad Quesada as I had assumed).

It was a pretty drop closely followed by a second waterfall significantly higher and wider than the first. 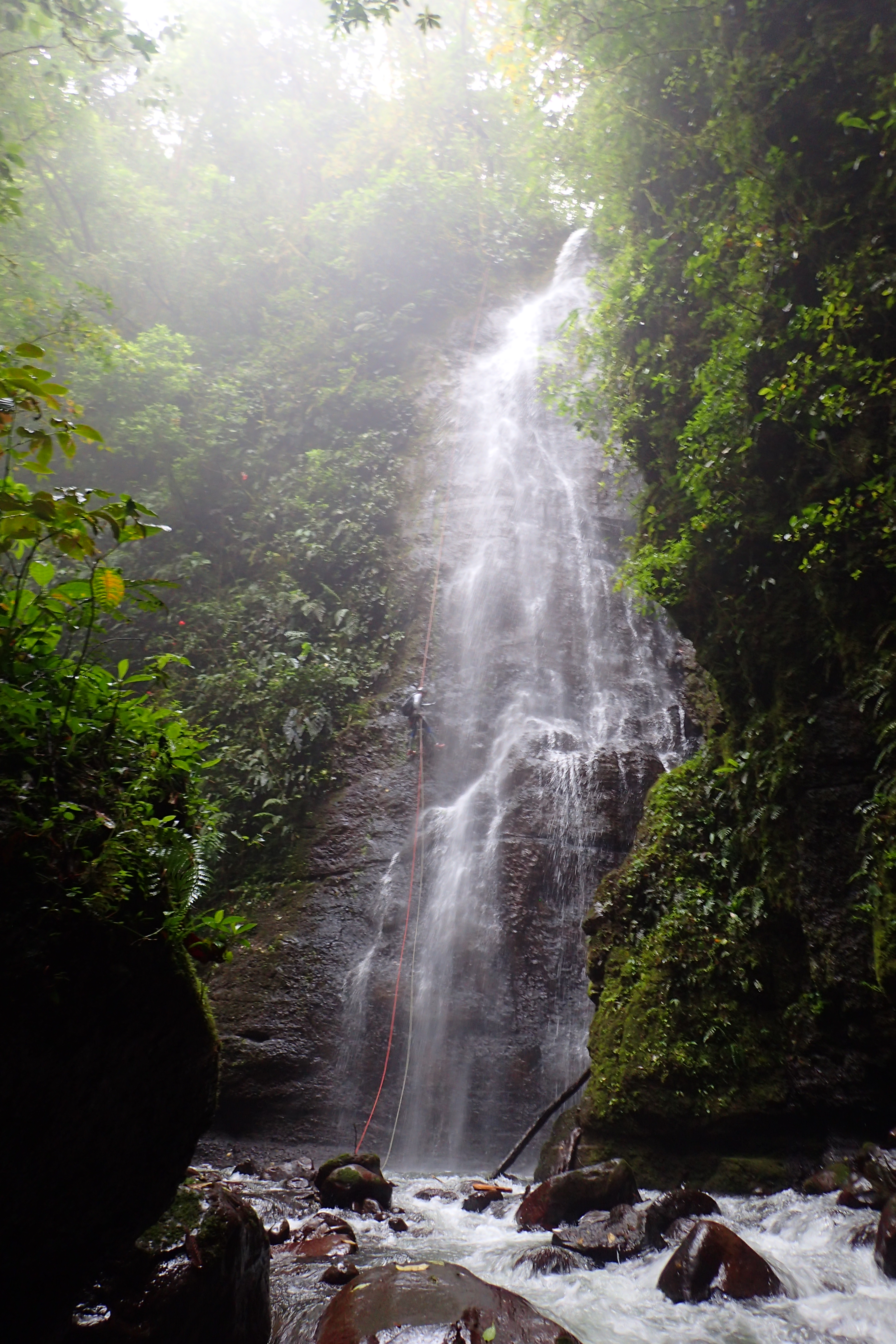 I hid below as Fernando dropped rocks from above.

Retrieving the rope went without a hitch. We rounded the corner and were gobsmacked at the amazing constriction before us. How many people must pass over the bridge every day without knowing what is just below them? 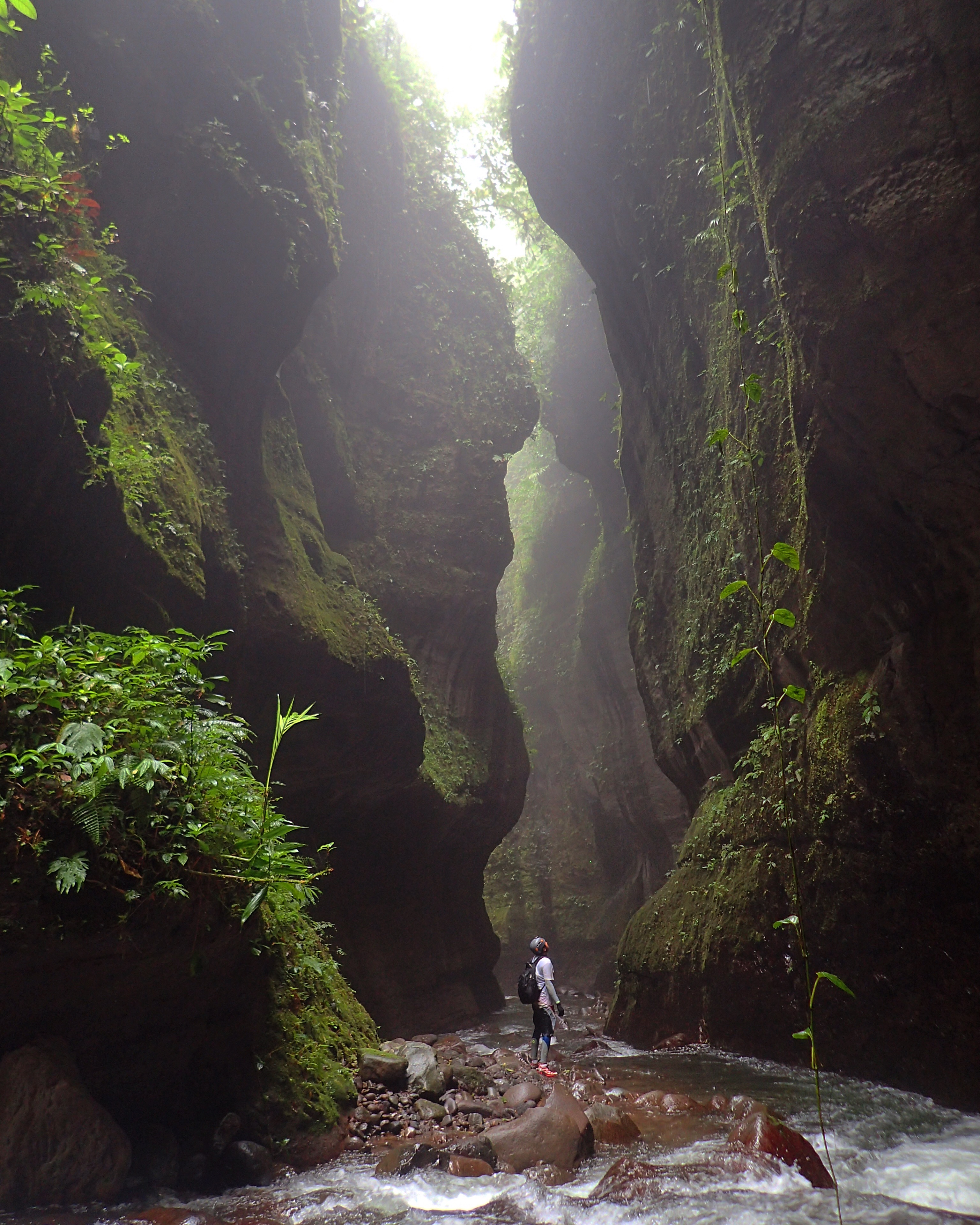 The really pretty section is quite short… With the clouds appearing to thin, we decided to head back upstream to see if we’d be lucky enough for the sun to show its face.

I couldn’t believe it! but for maybe a minute, beams of light shot down into the cañón. I was happy I’d made the call to head back! The cañón gods were smiling down at us. 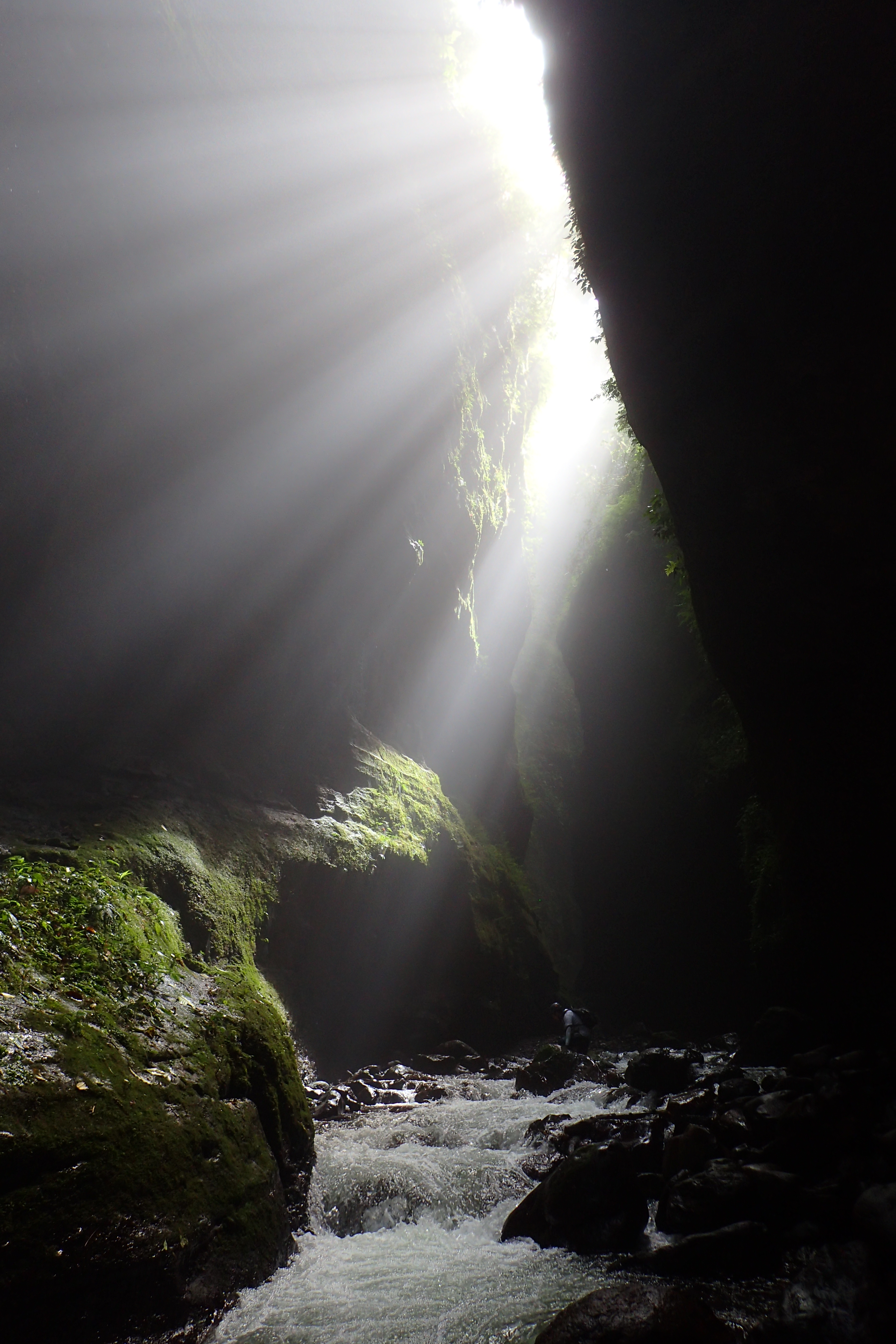 After enjoying the amazing surroundings (again), we slowly made our way back downstream; slowly and pausing often. 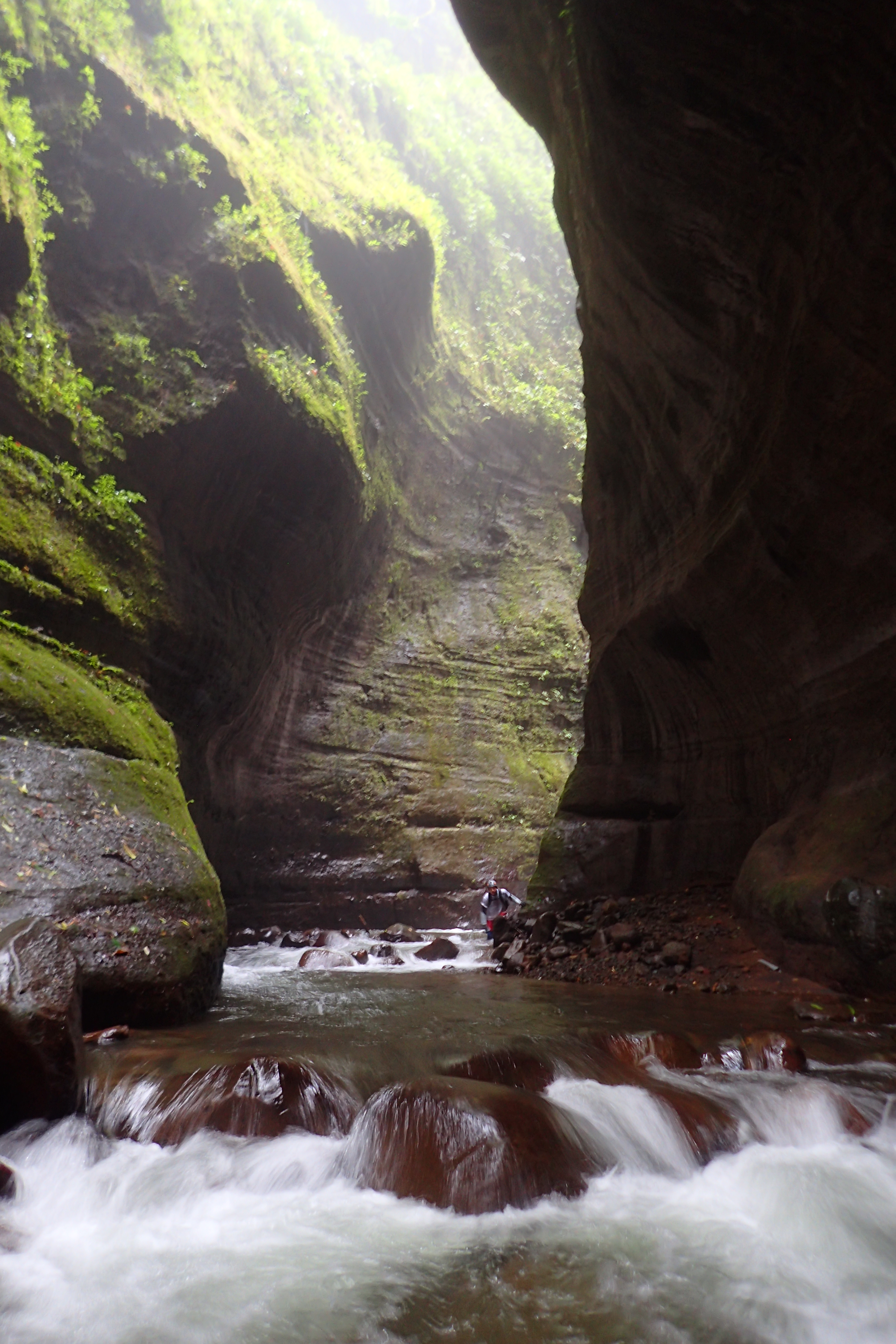 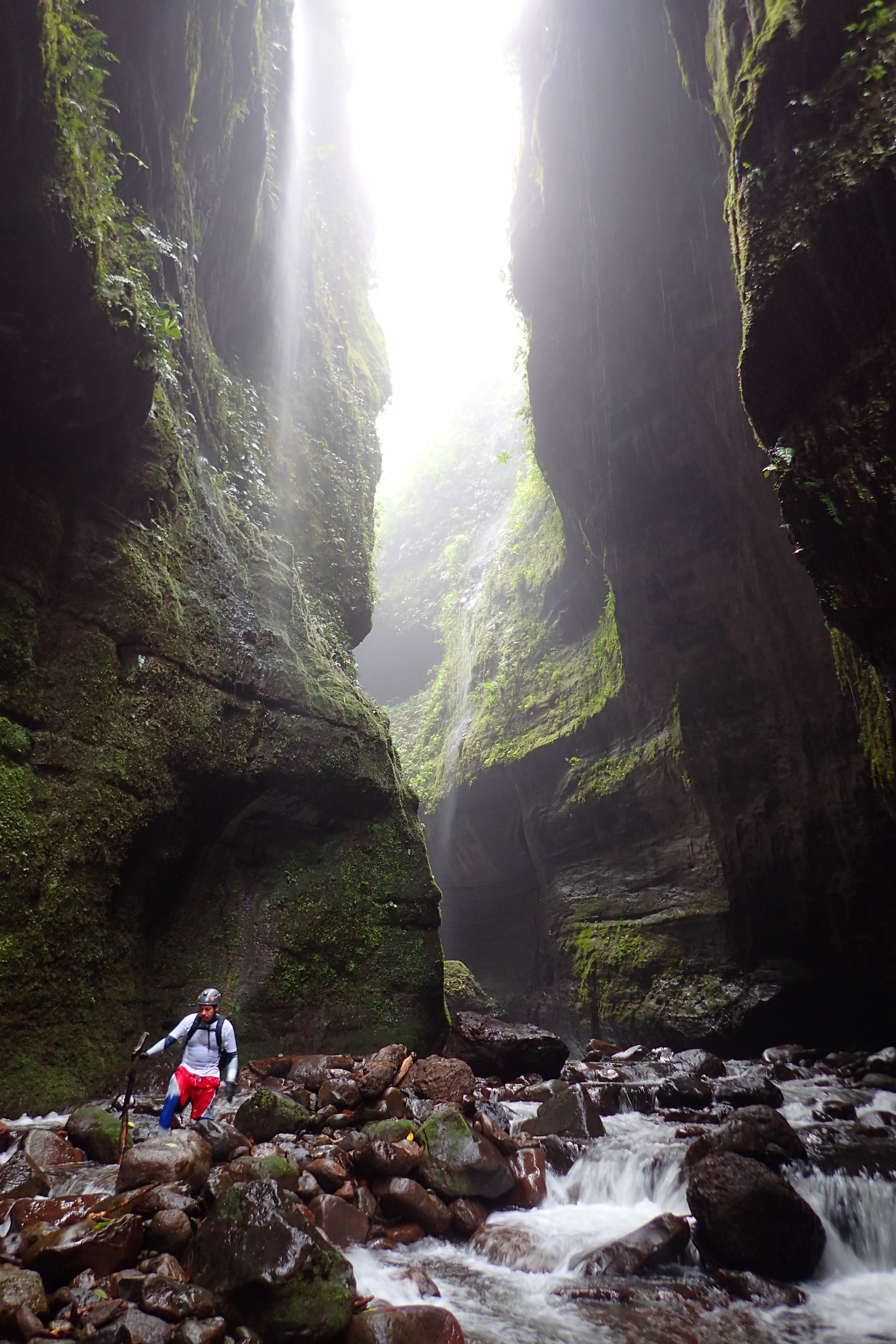 All too soon, I spied the bridge above. (The most difficult section was a downclimb that is just visible from the bridge). From here there is about 800m of very pretty creekwalking (despite the increased rubbish presumably thrown from the bridge) to a convenient exit CR. I used my compass to locate the spot, as it is where the river swings to the north. 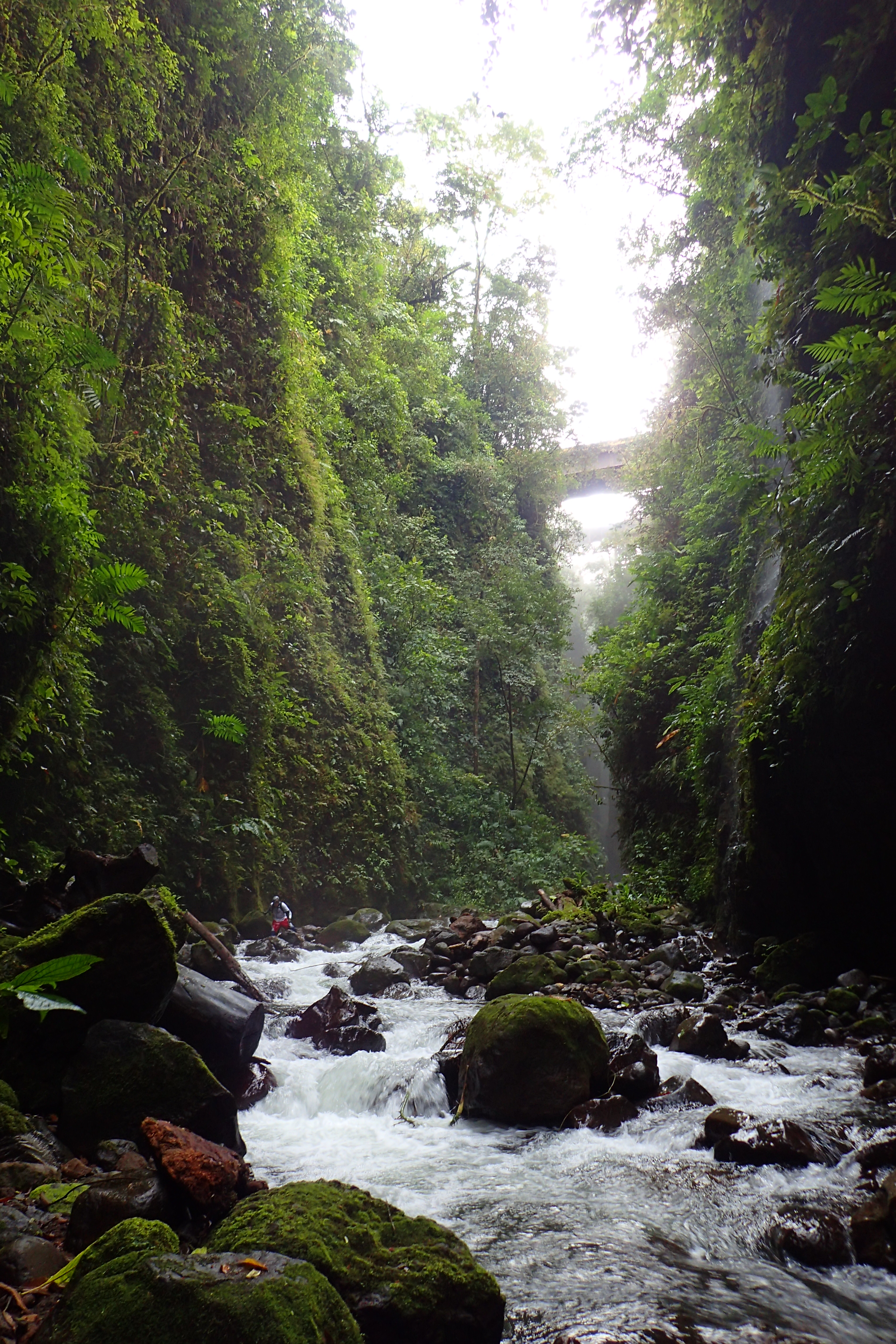 I got a little annoyed at Fernando for taking almost half an hour to round the corner. He had stopped to take his wetsuit off despite being a few mins from the exit.

It was a steep climb out, and we made use of the small trees to help haul ourselves slowly up. Towards the top, an insulated wire seemed to have been strung a long time ago to guide people in and out.

Crossing some paddocks, we located a path similar to the one we’d used to access the drop in… Thankfully this one lacked the decorations!

Soon we were walking through a small community and then down the highway to our car. Some people who had stopped to peer from the bridge gave us some odd looks. Either they weren’t used to people picking up rubbish, or we looked like we’d just emerged from the jungle… Well: maybe it was both!

We were soon on our way to enjoy our first routes in Bajos del Toro… I wish we’d bought fuel in Ciudad Quesada… We were pretty much out by the time we arrived. With no petrol station in town, I gave Fernando a told-you-so and we soon bought two overpriced gallons from a local before heading to the start of the next adventure.