I had been reading about the canyons in Canada long before I even entered the country. Morrow was one of the few in the Rockies that seemed to be visited somewhat regularly — probably due to the local adventure company offering guided tours (it also offered the only beta I could find which was plenty! Max abseil of 20m — what else did I need to know?).

Since my canyoning trip down into the Lower 48, I really hadn’t canyoned much except for a few around Vancouver, so when a colleague said it would be fine this time of the year, I decided I would visit it on the weekend.

The only thing I wasn’t too sure about was the approach. After climbing nearby Cinquefoil Mountain the day before, and paying extra attention when driving past, I had pretty much worked out what I would try.

Parking, I quickly checked out the sulphuric warm spring before scrambling up the embankment. Locating a goat trail, I headed up the valley. Favouring the sensibility of my four legged friends I headed up a half-way ledge that featured a good trail and amazing views! When the ledge ran out there was some talus to negotiate, but all in all it worked well. Kicking some steps into the snow I gained the saddle without even donning my crampons.

Following the gullies down on the other side I soon reached the creek. Apart from the trees, the canyon break-down reminded my a lot of the canyons I had done in Death Valley.

Passing some peculiar round rocks, I soon reached the first pitch, which you could easily bypass, but it was bolted, and it was an icefall, so I couldn’t resist!

After the first pitch the canyon narrowed, ice flowing from cracks in the towering limestone walls.

My footing was often a little precarious, but lots of fallen rocks (justifying wearing a helmet) had fused to the ice, making it easy to negotiate (like the fringes of a surface moraine). I still hadn’t found many people to go adventuring with in Jasper, so to take the photos I wanted involved me rappelling down, setting up my camera, ascending the pitch and then dropping down again.

As I got further down the canyon, I began noticing running water. I really hoped I wouldn’t have to strip down to pass any pools. From the tour company’s website I knew that it wouldn’t be more than about waist deep, and since most of the water would be frozen I wasn’t too concerned. Edging closer to the frozen lip, I clipped in my cows tail and looked down the longest single pitch of the canyon. I was itching to do some ice climbing, but was still sorting out a touring setup and had just missed out on a pair of second hand tools.

Part way down this pitch were some really cool inverted icicles. I wasn’t entirely sure how they might have formed. Perhaps in a similar way to stalagmites. The canyon soon ended. The final pitch was the longest but was stepped. My 100ft rope didn’t quite reach, but offsetting the ‘biner block a bit allowed me to rap down. I could then chimney up a bit to grab the end, although maybe tying some webbing in would have been a safer way.

Picking up some trash, I slipped my harness off and continued down the frozen creek. I was surprised when the creek entered a second constriction. I was too lazy to put my harness back on and decided to descend the rope hand-over-hand. More pitches followed. Being stubborn, I used a partial flying angel on one of the steeper ones. Others had logs that I could use which had probably been placed there by climbers reversing the canyon. On one of the drops the icy floor at the bottom collapsed. I instinctively looked for foot holds on the edges, managing to keep my feet dry.

On another pitch I was trying to down climb, slipped, and went crashing down through a thin floor of ice. Luckily it wasn’t far and the thin ice that had partially broken my fall hadn’t hidden any water. It was a short climb, but it made me realise that I need to be extra careful when alone, especially in icy canyons.

I soon reached the trail that had been marked on my topo map. It was getting late and having not brought lunch I was starving. The sun set on the drive home decorated the sky with streaks of pink and purple. What a great day! 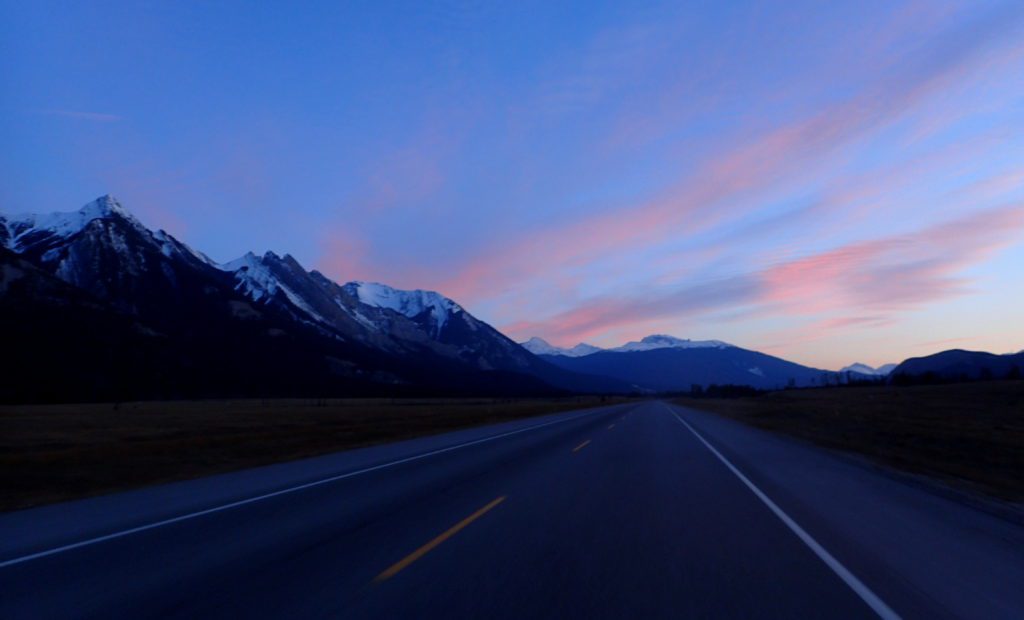