The cañón carved into the 75 million year old granite was ‘discovered’ by two Czech scientists in 2003. Of course they were simply the ones to put it on the map. Locals had long known it as ‘La Estrechura’ (The Narrows), and the areas original inhabitants, the Chorotegas, as ‘Tepezonate’ (Mountain of Water).

After a couple of light showers I packed up my small camp situated just outside of Ocotal. The gate by the highway lay discarded on the ground, the first post broken from last night’s visitors…

As I started trudging up the hill the rain set in and I was quickly drenched. Maybe an hour later I reached a bus stop (at what was almost the top). I didn’t really have the intention of catching the bus… I’d been hitchhiking the last few weeks from La Ceiba. Sticking my thumb out I was suprised when a camioneta quickly stopped, then I found out it was one of the border officials who had questioned me when I’d entered Nicaragua a few days ago. What a coincidence!They’d tried to scare me away from climbing Mogotón, but relaxed a bit when I explained to then I’d be safe from jaguars I didn’t taste very nice!

I got a lift to the cruz and then walked 1-2km to a school. I’d gotten tired of standing there when a ute pulled over giving me a ride into Somoto. 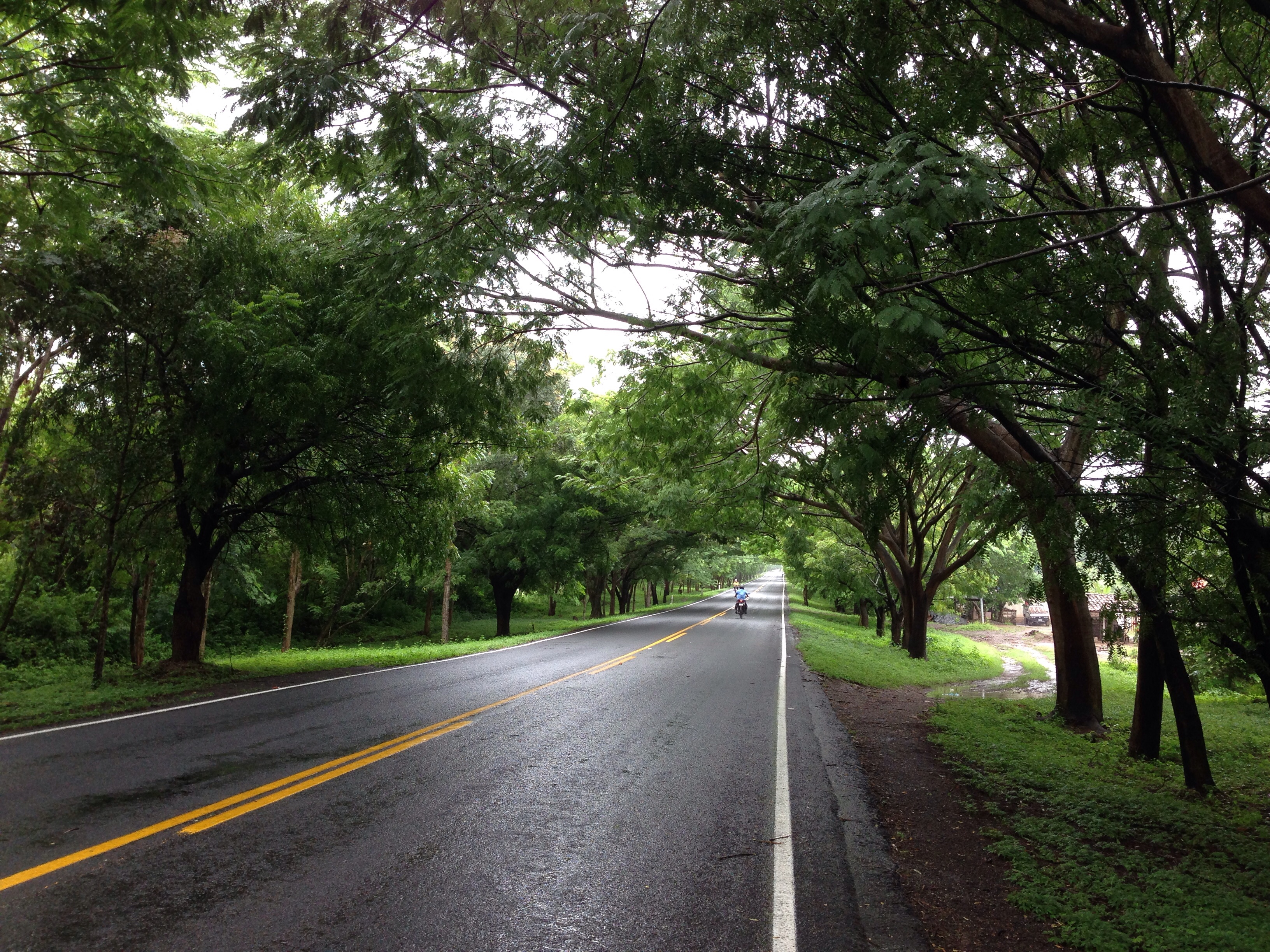 A lady offered to help me find a cambio man (I gave her mi sandalias – I was tired of carrying then). The exchange rate was a little better than yesterday, but still not amazing (1 Lempiras:1.2 Córdobas vs 1:1.15 ayer), but I still decided to hold out. Walking back to the Panamerican a ute pulled over to offer me a ride… So friendly! But there was perhaps another side to this friendliness… He was cañón guide and wanted my business… This put me in an awkward position… Id pretty much decided to run the canyon myself even though I wasn’t sure about the legality of this. I had a balancing act on my hands…

He was going shopping for half an hour, so I told him I’d wait on the Panamerican, not so secretly hoping I’d get another ride. It didn’t happen and I was soon in his front yard. I got another tour spiel, but I again politely declined… I felt a little bad as I walked away. I’d received some useful info : I’d seen a map of the main two routes, info of a compolsary jump, rough times (4-5hrs short)(5-6hrs long)… And most importantly that it was runnable at the current water levels… Only with a guide.

1k Limps (~1.2k Córdobas) seemed a little steep (but for another country it’s actually rather good considering it included food and a nights accommodation). But it was more that I enjoy exploring the route myself.

Despite being told that there was no place to camp on the Río Tapacalí I thought it was worth a look. Passing some wierd fruit trees, I lunched under the bridge while some locals began fishing on the other side. Before I’d left they got their first fish! 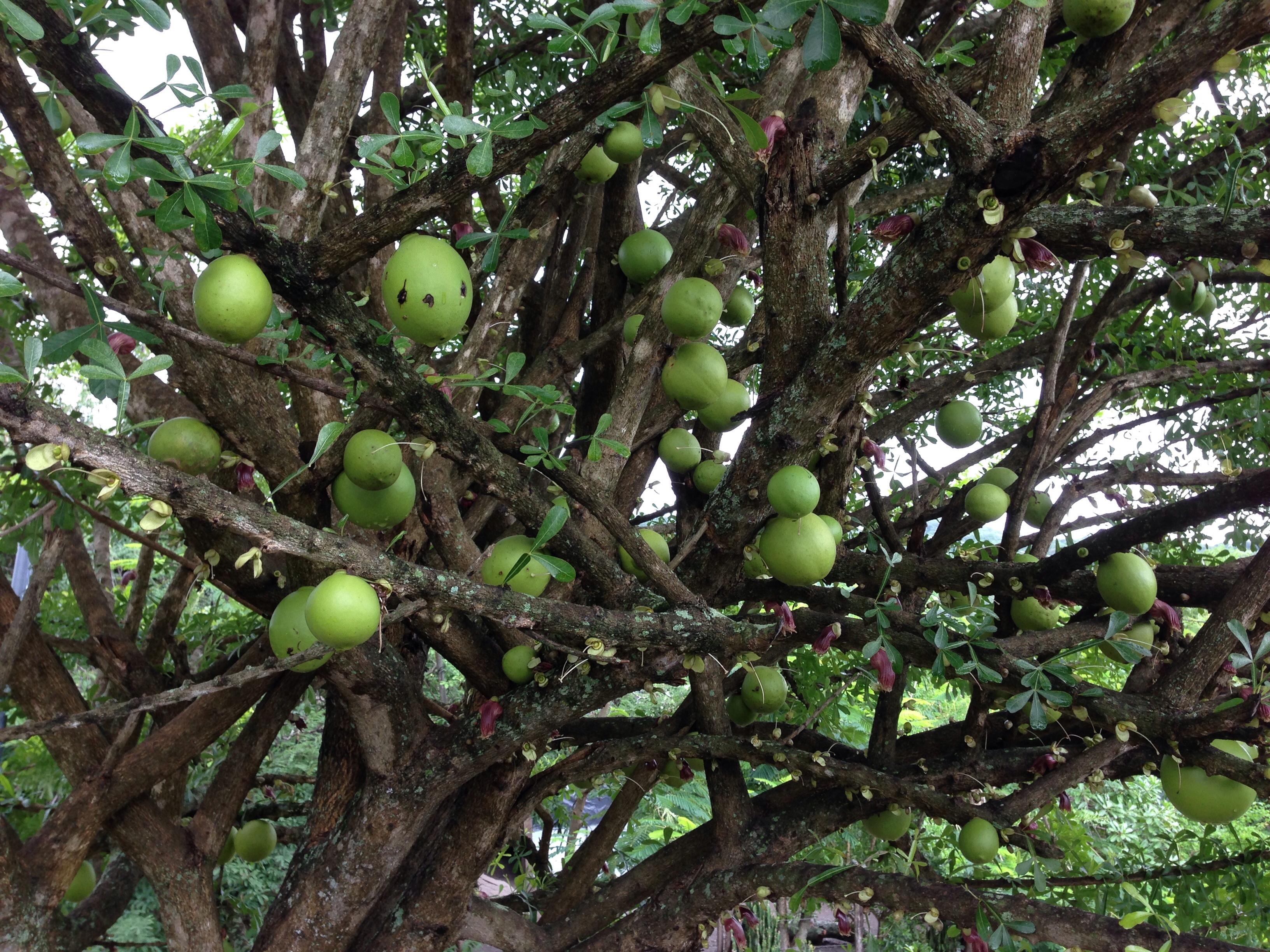 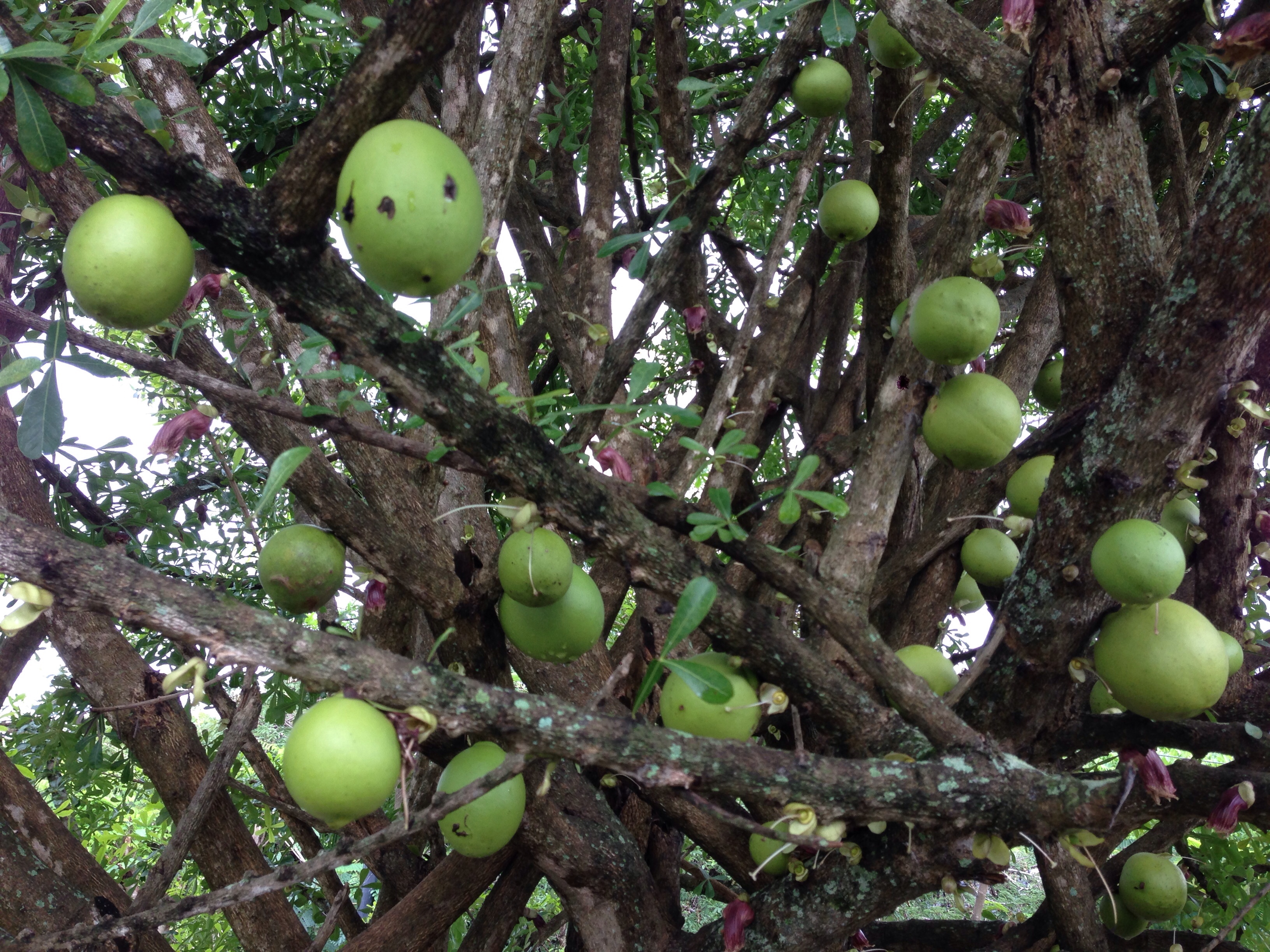 I explored down river. It was very scrubby, but I soon located the trail and proceeded with a waist deep wade. Someone was ahead of me, there was a single set of prints in the thin mud… Continuing, sections of the trail were underwater… This made me nervous. Im not experienced with white water and reading hydrolics…

It was already after midday and I decided to wait till tomorrow to run the canyon. Seeing a person up ahead, I scouted up to the right for a hidden camp. It was a wasted effort and I soon retreated to the ‘beach’. It was ultimately where I’d spend the night, but I headed back upstream away to check for a better place, soon running into the guy I’d seen earlier. He’d been out fishing too, and had a bag full of fish for dinner. He identified an edible fruit for me called ‘calabur’ though it didn’t match the description in my dictionary… Still it was sweet and tasted like a plum. The pit was a little large and the skin quite tough. Still they were very welcome considering my dwindling food. 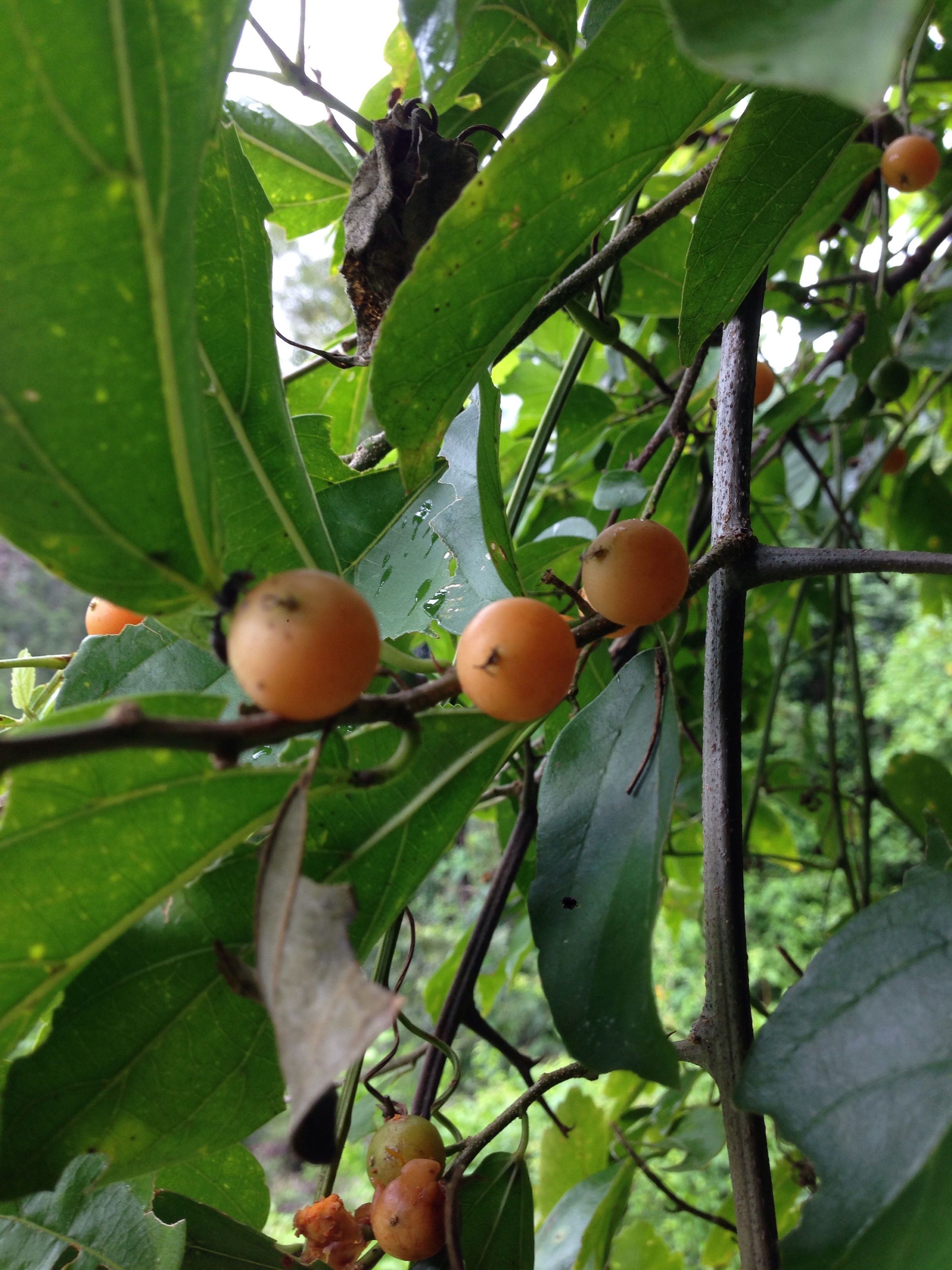 i decided to camp on the beach, the steep slopes had also hidden a throng of mosquitoes. I need to research Dengue fever…. And where maleria starts (I find it funny I wrote this in my notebook considering I soon was afflicted with Dengue!)

An afternoon of rest, reading and writing was in order. I’d been in Nicaragua 4 days now and still hadn’t got any Córdobas… Maybe I should check at the frontera mañana – it’s really close. My food is certain to run out tomorrow. I’ll also need to get to Managua quickly; I only have a few days left on my CA4!

I placed sticks to monitor the river levels. As the afternoon progressed, the levels dropped… It made me feel more comfortable, but the next morning I was supprised to find the levels higher than the previous day!

I cached most of my gear concealed up the slope, keeping my foam sleeping mat, and a bunch of empty PET bottles in my pack as an improvised life jacket. Id done this before in México, it’s supprising how well it works(and yes, at the levels I had, I’d say it was compulsory!)

I followed the trail downstream, in one section it was obscured by knee deep water. I scrambled along the rocks, but soon I encountered a constriction. I couldn’t go further without some level of commitment. I evaluated the rapids and eventually backtracked, slipped into the water and was swept into the maw. After the rapids I relaxed in the smooth but strong currents admiring the steep rock walls on either side, and then large hollows sculpted out by the river. Walking through one on a sand bar I could smell the bats that must roost here. Indeed some later flew over me further downstream.

Continuing, the short section of cañón quickly ended. I swam from one side of the river to the other trying to avoid the rough sections of water. Some rock hoping and backtracking to safely cross I found myself at the confluence where the Río Coco is born.

The Coco was more of a gorge here but as I scrambled and floated downstream I finally reached the canyon proper. It was scary. I climbed high up on the right to access the flow. I couldn’t really see an option I was comfortable with. Jumping was out as visibility was only about 5cm!

I thought about bailing. Maybe I could climb out? But I kept returning to the fact that it was runnable with a guide… Where I climbed was not frequented… They must run the river here, run the rappids. I climbed back down and trying to hug the wall was soon swept into the melé. Even with my improvised life jacket I spent time under water, some scary undertow pulling at my legs. I may have panicked a little as I swam desperately for a calm circular hollow carved into the rock. Heart elevated, I made it! I again scaled the rock to access, but again was back in the water. Bobbing back to the surface, the water swiftly carried me into the cañón proper. The water calm (but powerful). I let out a small laugh, a smile splitting my face. What a beautiful place. I was in the control of the river now. I had no choice but to go where it took me.

The pace slackened, the water must be pretty deep I figured. For several minutes I enjoyed the relaxed pace and then spotted the waterfall ahead. I didn’t want to be swept over that! Frantically I swam to the side, supprisingly it was not a problem. The blockage created an eddy and I actually had to swim against a medium current before I could exit onto a rock shelf. The waterfall looked a lot shorter than expected… Now where to jump. I studied the water trying to puzzle where a possible rock might lie. Limiting my jump as much as possible, I hit the water at an angle slicing into it. I was safe.

The water swept me past a popular jump spot (el Salto) but that twas okay. I wasn’t here to jump. The cañón widened and the velocity of the water decreased with it. I’d survived – not that I’d held that in question! 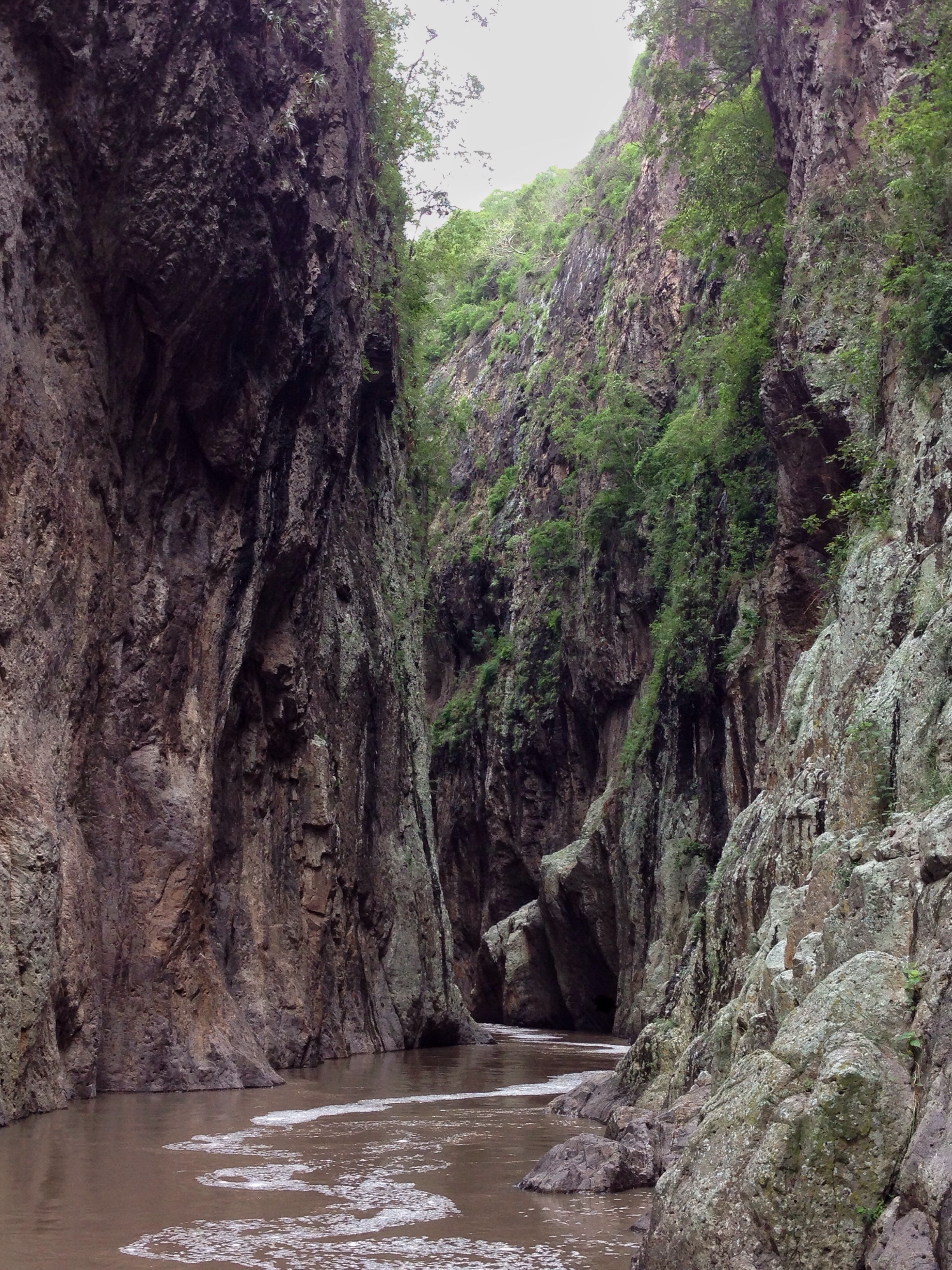 I saw boats ahead (y un mirador high on the left). On the tours’ you float the rest of the river to the exit. Trying not to attract attention of the fisherman, I found a good trail river right that is used by the dwellings in this side of the river. A woman washing clothes in the river gave me a rather suprised look, as did a couple of others who passed me before I reached the road out.

I passed the information booth which had some info on the cañón and a map similar to the one the guide had shown me the day before.

I walked the road back towards the river I’d started at, this time taking the much easier camino to the trail. I passed a guy working for the National Monument. With a small grin I promised him I wouldn’t enter the cañón without a guide…

I gathered my belongings. Packed. Ate some final fruits from the tree and was soon back on the rd. I met several characters early on sharing some guavas growing by the roadside as well as some local Nicaraguan liquor made from caña de azúcar. After walking over an hour a colectivo camioneta stopped to give me a ride. I paid the fare, and when he gave me the money back because I’d been hitchhiking, I returned it, telling him I wasn’t paying for the ride but for the fact they stopped. He seemed to accept this.

Buying some food I waited on the edge of town… It was slow. I was joined by a guy I’d passed on the rd several days earlier. We were soon joined by his friend. I piggybacked on their familiarity sharing a ride in the back of a camioneta of someone who I think regularly stooped for them.

We jumped out at the cruz. I heard some taxi drivers curse ‘puta’ as my thumb went out, not sure if it was a coincidence. This time within a minute or two, I piggybacked on a lady’s ride, scoring a ride to Estelí. I walked across town to the supermarket Palí (another in desguise Walmart). I finally withdrew my first Córdobas – cursing the bank fees and wolfing down a tub of icecream was supprised to find over 30 ppl hitchhiking. The most I’d ever seen! I hadn’t stopped walking when a camioneta stopped. I piled into the bank with six other ppl, eventually setting up camp by an arroyo outside of La Trinidad.