Party: Mum, Dad and I

It was hard to get moving. We’d stayed in a small inn in Hanksville, and after 10 days of camping in around -10C it was nice to be warm, have running water and a toilet. Eventually we roused and headed 10 miles out of town Sand Slide Rd. I’d read that this should be passable with our 2WD vehicle and we managed to make it just past the turnoff to the trail-head before deciding we’d walk the last little bit.

It was a busy morning; lots of BASE jumpers fired up to jump the nearby cliff. Our mellow trip felt tame in comparison. There are actually two forks of Angel Cove (the main and south forks). We started with the main fork which didn’t actually have any rappels/abseils. There were a number of short drops but all had fixed ropes in place making it easy to hand-over-hand down. This was presumably for jumpers intending to reverse the main fork. The canyon remained quite wide never really slotting up and there wasn’t much that seemed to justify the high ranking for this route. Things improved once we passed the junction with the South fork. The canyon became narrower and featured better sculpting and horizontal fluting.

The best part was short lived and we were soon looking out over the Dirty Devil River. There were two pitches below us to reach the river, but we decided to take the short cut exit and drop down the South fork first. Spying a nice outcropping in the sun, we headed over to dump some unnecessary gear (the longest pitches were the last two). Whilst looking around, we noticed the BASE jumpers getting ready and ended up lazing around for a while snacking as they jumped one after the other, small drones buzzing around catching footage. It was a short scramble up a couple of small cliff bands and we were at the drop in point for the south fork. This route proved to be of quite different character. Instead of being wide and consisting of many smaller slides and climbs, it was narrower and more vertical, boasting half a dozen (or so) pitches that most would probably prefer to abseil/rappel.

None were particularly memorable, bar one where the pull didn’t go so smoothly, luckily this is the one I had down-climbed making it easy to rectify the problem – Dad will have to practice setting the rope being last down. LAMARing I believe they call it here in the US.

In was nice that the best section of the canyon was the bit we got to do twice! This time round we dropped the last two pitches. Unfortunately (or perhaps fortunately since it was pretty easy to get back to the top) Dad went last on the second pitch and lay the rope down in a crack meaning the biner-block wasn’t going to pull. We identified it just as he got over the lip, but he wasn’t comfortable ascending to fix it. It was a good spot to make a mistake and we had it fixed in 10 mins or so.

Somehow I’d missed it on my way past the first time, but heading up with Dad (Mum was enjoying the sun), we bumped into a couple of pictograph panels. It wasn’t in amazing condition, but I did particularly enjoy the one of the human figure carrying a giant lollipop (reminds me of some funny conversations how we say ‘lollipop man’ in Australia whilst it is ‘crossing guard’ in North America).

All in all, a nice easy day out! 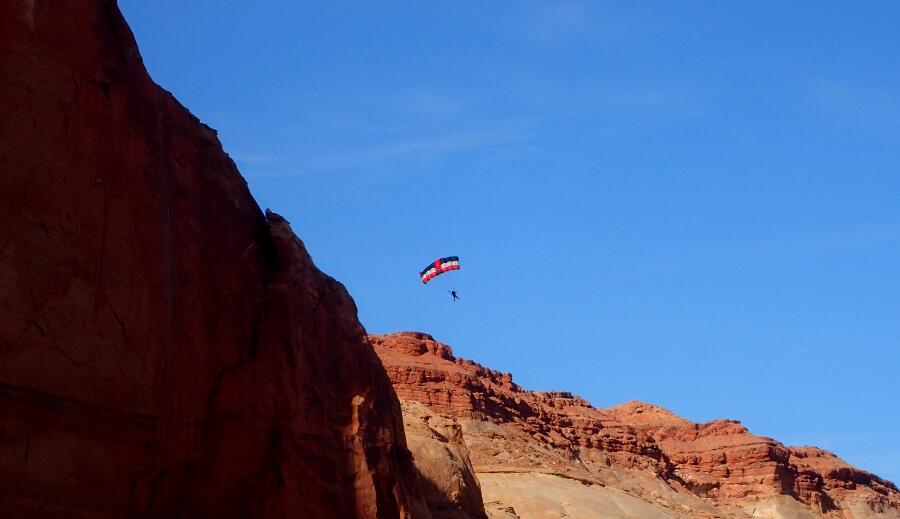