Millions of years ago, magma pushed upwards, cooling in a band running north to south along several kilometres near what is now Tarana. As eons passed, the softer rock that once covered and surrounded it eroded away, leaving a distinctive granite ridge topped with thousands of boulders of all shapes and sizes.

At the highest points, these boulders are perched high above the surrounding landscape, creating distinctive features full of interesting monoliths, separated by cracks, caves, and tunnels. Among the most impressive is Evans Crown, a feature that not only gives the nature reserve its name, but can be seen clearly from the surrounding valleys. I had spotted the area on a map, drawn in particular to the dozens of dots marking the most rocky section. Looking more closely at the aerial photograph, it was clear the impressive outcrops were even more plentiful that the map recorded.

Posting my plans for the walk, I discovered that there’s either a lot of people who love scrambling around rocks as much as I do, or more likely that there’s a lot of unmet demand for day walks. Within two hours I had 12 people signed up.

A few people were struck down by illnesses and injuries in the lead-up to the trip, but I was quietly thankful when they told me because it meant we’d be able to shrink the group to a more manageable size. On the day, nine of us arrived in the nice big parking area within about 15 minutes of each other. I hadn’t realised that National Parks had recently upgraded facilities in the reserve, so my promise of off track exploration seemed a little absurd as we passed a large sign before racing up the very well maintained track to the ridgetop above.

Thankfully, the track stops here, leaving visitors with the pleasure of finding their own way through the interesting landscape, exploring as little or as much as they wish. We started off with a quick side trip to the north. This area had seemed the least promising on the map, but I wanted to check it out. We spent about 20 minutes following the ridgetop, dodging the spikey shrubs (possibly Acacia Paradoxa / Kangaroo Wattle). It was clear this area had long been grazed, with macropods and marsupials reclaiming a landscape that had previously been home to cattle and sheep.

At the northern point we paused to enjoy the views from some rocky outcrops, before returning south via an aimless zigzag, moving from interesting boulder to unusual outcrop. I took the opportunity to demonstrate some chimneying through a narrow crack where one of the house-sized boulders had split in two. Before long we were heading south into the most promising parts of the reserve. Here, massive boulders rose up improbably, while others were balanced precariously as if the work of some bored giant.

Despite being a small area, it was soon clear a day wasn’t enough to do the park justice. We clamboured through cracks and caves, followed ledges, leapt over crevices, and generally followed our noses to see where they’d take us.

Stopping for lunch just below Evans Crown, after deciding that there didn’t appear to be any easy routes to the very summit, we looked across at another interesting maze to the west. Unfortunately, it was decided that if we detoured to explore it, we’d almost certainly miss any chance of finishing the walk with a quick dip at the nearby river. Pressing on to Crown Rocks, we were awestruck by an odd-shaped boulder not only balanced precariously on top of the rocky outcrop, but itself topped with a tenacious little shrub that somehow took root. Most of the group scrambled up, using a ramp that provided an easy climb up, but proved a slightly more exposed descent.

Following the ridgeline further south, we climbed up a slope of broken scree intermingled with lomandra. While much of the terrain was clearly altered by two hundred years of invasive agriculture, this spot felt unchanged from how it would have appeared to the Wiradjuri traditional owners over many thousands of years. A final rocky playground, complete with a maze of cracks and crevices, finished things off, but not before we spotted a rocky outcrop that looked remarkably like a giant stone puffin.

We descended steeply down a grassy, lightly-treed ridge, which was clearly popular with the local kangaroos. About half way down a large mob bounded across in front of us, tackling the terrain in their effortless way, and providing an exceptional display for the international students among the group.

Reaching the Fish River, where the Tarana Gorge has cut through this band of granite, the swimming situation was a little poorer than hoped. We settled on a waist-deep pool among towering casuarinas, with half the group stripping off for a refreshing dip, while the others chatted where the waters cascaded through some small boulders. Skirting the neighbouring farmland, where the efforts of a large wombat population to burrow countless holes under the fences were admired, we encountered one badly afflicted by mange. Clearly blind, it almost crashed into us as it raced towards a nearby burrow.

Back at the cars, most of us decided to drive to Katoomba where we could finish off the lovely day with a beer and a pizza before returning reluctantly to the real world. 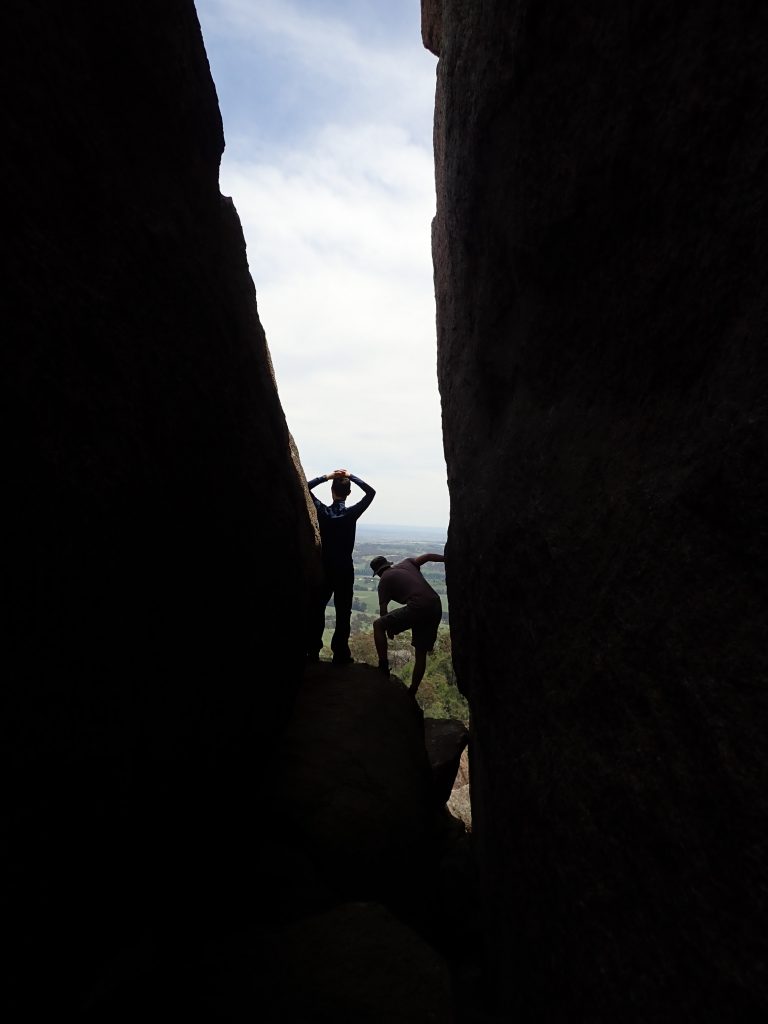