After a relaxing morning playing guitar on the shores of Edith Lake I headed to Noah’s to see what he was up to.

I’d been planning to climb up Pyramid Mountain, one of the most iconic peaks visible from the town of Jasper, and was surprised I hadn’t heard from him as he’d seemed so enthusiastic the previous day. It turned out he’d just mixed up the days and was still down for the multi-day adventure! My original plan had been to snowshoe up, but I was convinced (with ease) to augment the mission into a ski oriented one.

We tried to pack light, only taking sleeping bags and a fly (I threw in my bivy bag for good measure) and sharing a stove. But with all the avalanche gear, along with skis and boots, our packs were bulging.

Noah had the great idea to strap our skis to the sides of our bikes and after a test ride it was obvious this was the way to go.

It was getting late when we finally headed up to Pyramid Lake.

It was amazing how quickly the seasons had changed. Last time I was up here you could walk across the lake.

As we climbed upwards, I realised that I could clip my boots into my bindings to lessen the mass on my back. Unfortunately for Noah, this wasn’t an option as his skis were centre-mounted.

We’d just passed the turnoff to Palisade lookout when we hit the snowline. We pushed our bikes through one deep drift before locking the bikes to trees hidden from view and switching to skis. Being quite isothermal the snow wasn’t great for skinning, but Noah pushed ahead, breaking trail and allowing me to conserve a bit of energy.

Soon we reached the home run to the base of Pyramid. The corridor of trees drawing our eyes to the lofty peak. The face looked quite steep and I still had my doubts to whether I’d feel comfortable skiing it, but with the light fading other more pressing thoughts soon took over, like where would we spend the night?

My original plan had been to camp by the tarn but with all the snow it would almost surely still be frozen over. Even if it wasn’t, Noah hadn’t brought a sleeping pad, so snow camping wasn’t a sensible option.

We spied some clear spots on the ridge East of the tarns and decided to aim for there. There was little light as we tied rocks to the corners of the fly we would sleep beneath. The wind had picked up making this even more challenging, but soon we had it tensioned down over my ski poles.

Cold, we crawled into our bags and after cooking up a pot of mac and cheese hit the sack.

Sun shinning, it was late when we rose the next day. We were in no rush. We’d scramble up the East ridge (instead of the North as originally planned) and have the rest of the day to rest and take in the views.

Packs laden with gear, I felt quite cumbersome as I picked my way up the ridge.

The edges of the tarns glowed a spectacular blue, and the lakes around Jasper looked like atolls in an ocean of green. As the boulder slope steepened, water could be heard rushing beneath. I wondered if this was the main force that created these rocky slopes? In the summer I’d always just assumed the boulders had fallen and slid from higher up the mountain.

As we neared the summit our route took us to the edge of the steep Southeast face that can be seen from town. It was a long way down. It is still a little crazy to me that people have skied these couloirs, but then again skiing Pyramid at all would have seemed a little outrageous to me at the start of the season — and look what I was doing now!

There were a couple of sections of snow that needed to be boot-packed, and then we were standing on the summit! It was a great feeling to dump the packs and spin around, trying to take it all in. Every direction you looked were magnificent views, and all quite different.

We started digging down in the snow to make a fort. We were going to dig to ground and make a clear patch that would hopefully dry before sunset. But with the hole far deeper than me we decided it wouldn’t work and settled for a clear patch on the West side of the peak that was covered in water worn gravel that must have been transported up when the cable car was still in place to service the communications tower.

Some paths were made to change view spots, a kitchen dug out, a sunrise-seat… and then the chilling began.

The remainder of the afternoon was spent moving from one spot to the next: from camp, to the sub-peak, back to the sunrise seat, down to the Jasper Lake view, and then all over again. It’d be nice to have an afternoon like this on every peak! As the afternoon progressed, small additions were made to camp. Most notably Noah built a rock wall to block the worst of the wind from his sleep spot.

The sun slowly dipped below the horizon, turning the mountains to spectacular shades of red and orange. This was contrasted by Maligne Lake, which transitioned from azure to purple. With the days so long sometimes its hard to realise how late it is and why you’re tired. Eventually I realised that there was no point waiting for the stars, I should just get some sleep and when I woke up in the night have a short walk around.

When I woke I was looking upwards and the galactic core was right above me, with seemingly twice as many stars as normal. Wow! When I half sat up and looked to the north I saw what might have been Steve up above and then later some Northern Lights dancing across the sky.

I walked around for 5 or 10 minutes before the cold told me to retreat back to bed.

We woke relatively early. I made us both some hot chocolate and then we packed and got ready to ski the face. There had been a decent refreeze overnight. The water in my Nalgene bottles had partly frozen and the snow on the peak was now quite supportive. 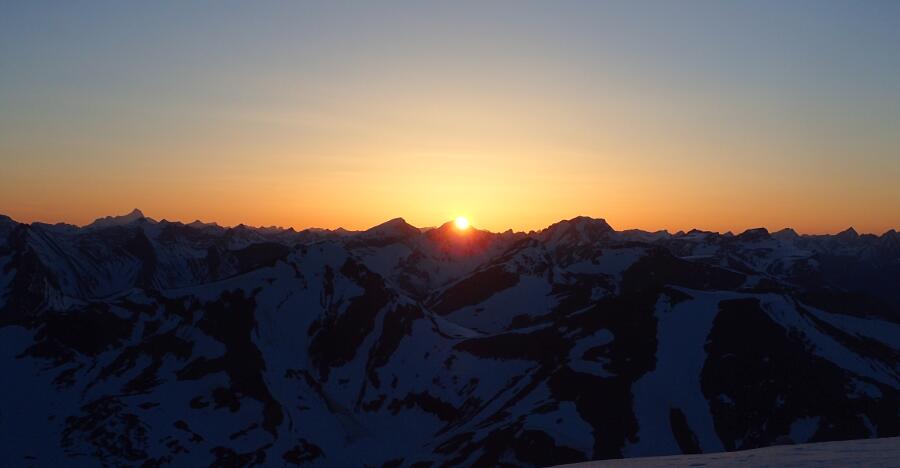 Just before 7am we were ready to go. We did another transceiver check, made a plan (picking out a few safe points) and then clearing a small cornice, down we went.

I was nervous at first, but after we cleared the first band of rocks I began to lean forward more and enjoy myself.

As we neared the bottom, entering the gladed area, the snow began to get a little punchy.

We had timed it really well: early enough that the snow on the face had been supportive but a little soft on the surface. Noah was ecstatic. He’d been wanting to ski this peak for quite some time!

From the peak back to the cars was just under 2 hours. Crazy when thinking how long it took us to get up!