Party: Felix Ossig-Bonanno, Jono Yiu
Beta: I have put some beta up on RopeWiki. Trip report from probable first descent.

The canyoning bug seems to have been rekindled inside me. Maybe it has something to do with the warming weather and the fact that the window for ice canyoning is closing.

During the week I started making plans to tackle Garonne Canyon. Starting high in the mountains beneath the face of Mt Colin, this impressive gorge has two main constrictions. But when planning for the trip I didn’t know this as there was little hard information I could find. Greg, a local canyoner, gave some hints on what to expect for the pitches, but seeing as we’d be in winter conditions you could bet it would be quite different!

The first thing to work out was how to get to the top of the canyon. The guess work for this was lessened by the fact that there is a Alpine Club of Canada hut at the base of Mt Colin, which is primarily used by climbers. By researching how to get to the hut we had what we assumed was the path of least resistance, allowing us to simply drop down through the canyon and be on our merry way.

While it sounded easy, the trip proved to be quite an epic with moments of Type 2 fun!

We convened in my apartment around 8:30am. My bag was pretty much packed but there was plenty of gear sprawled on the carpet for Jono: more rope, an ice screw kit, anchor building material, ice tool, crampons. Soon his pack was bulging.

The simple way to get to Garonne Creek would have been to canoe across the Athabasca, but lacking any form of boat we’d have to walk 7km along the Overlander Trail. We parked at the 6th Bridge and shouldered our packs.

There wasn’t anything overly special about the trail. It had a sort of U-shaped cross section, with the depression probably created by the horses and bicycles that travel this historic route.

We chatted as we walked, pausing briefly at the John Moberly Family Homestead, with the canyon now quite close in the mountains on our right. Before long we arrived at the foot of the creek. Still frozen, it was quite easy to follow it upwards as it snaked around.

As the mouth of the canyon closed, we exited the creek and bush-bashed up onto a spur where we located a clearly defined trail.

The ground was quite moist from the recent thaw, making it easy to find purchase on what otherwise would have been a slippery trail. With the elevation we’d gained we now had great views into the Yellowhead Valley with The Palisade cliff-line spread out before us.

The trail was a little obscure and we found our own way for a while, climbing where the footing looked easiest and avoiding the patches of shallow snow. Soon we gained a rise and the view captivated the both of us: the shear magnitude of the diagonal limestone bedding planes was staggering! We spent some time absorbing it all. 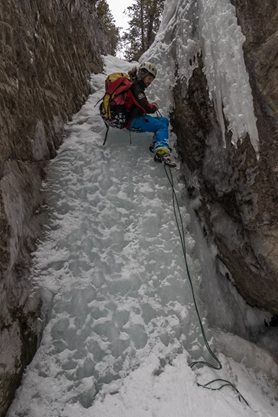 Down below you could also make out what must be the crux of the canyon: a huge icefall plummeting from a small gap in the cliffline. It looked a long way down even from here!

As we continued upwards I lost the trail and again decided to make my own way (the trail was snow covered anyway and wasn’t exactly the easiest footing). This proved to be a bad decision. 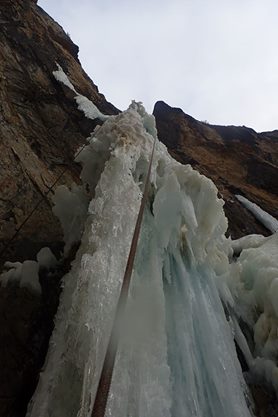 As we continued up, the snow deepened and we were soon post-holing (and even crawling) through yet another cutblock (I imagine these were an early attempt at stopping the infamous pine beetle).

Things only worsened when we entered some new growth. Memories of a similar situation (albeit, without snow) on Narrowneck surfaced. I felt pretty bad for leading Jono into this mess and after an hour of breaking a horrible trail we decided to drop back down out of it! 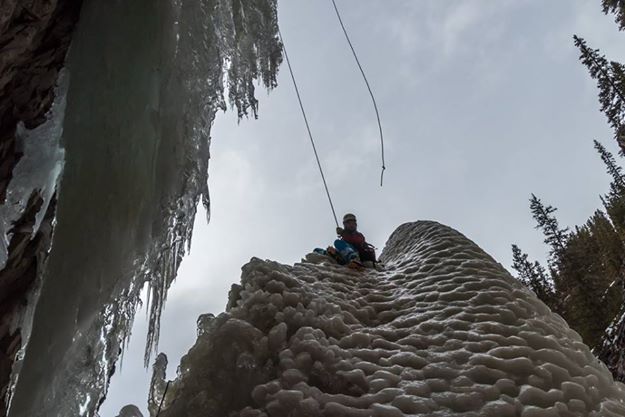 It was better lower, but not great. Kicking steps as we went, it was slow progress as we continued up the valley, occasionally sinking up to our thighs.

My legs were growing weary and I could tell Jono too was tiring. I tried to put on a brave face and kept punching through the relentless snow, forcing my legs to continue. 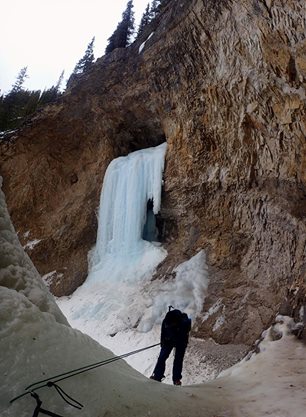 Dropping down through an exposed cliffline, we could see the open creek below us. We were nearly there! We stopped for a short break and then continued through the unrelenting snow. At least we were going down now.

We had one pitch before hitting a major side creek.

Soon afterwards we entered our first constriction with many fun slides and another short pitch. 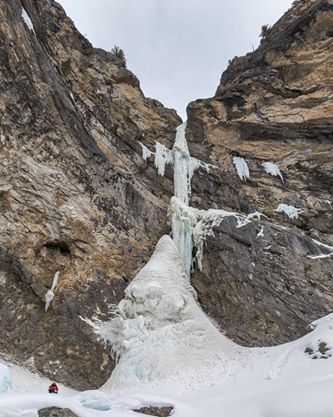 We rounded the corner and in front of us was open space. Blasted by a cold wind we approached the edge. This was it.

Looking around for an anchor we spotted a tree up on a sloping ledge quite far back from the edge. In the creek bed, some boulders were just protruding from the snow. They were frozen in place and looked solid. We began excavating them looking for a possible thread. 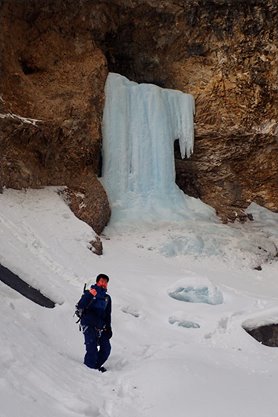 Pulling out a wire coat-hanger, I pushed it through the snow and ice. Reaching my arm beneath the rock managed to grab the other end of the wire. Attaching some webbing, I managed to pull it through.

I waited in the cold as Jono approached the edge. He described this drop as follows:

I truly can’t remember the last time I’ve been so scared. As I dropped over the edge, there was no going back. When I got the courage to take a curious peek around me, it was truly one of the most amazing things I’ve ever seen. It was like a giant amphitheatre made of gigantic rock faces decorated with magnificent frozen waterfalls.
On the other hand, I also noticed the distance beneath me and I was stricken with fear. I instantly wanted to give up and chicken out but it was far too late as I’d already dropped off the edge. An extremely slow descent followed as I gripped the rope so tightly which later gave me blue fingers.
As I miraculously reached the bottom, I was still shuddering from the ordeal, still in disbelief about what went down. But also feeling accomplished that I had overcome and come out alive of it. 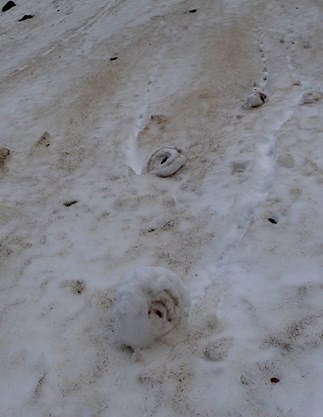 While Jono abseiled I periodically pulled on the rope, busying myself by piling snow on the redundant anchor. Eventually I felt the rope go slack.

I threw the pull end and neared the edge and then retreated away. Jono had had the right idea, so I also put on my crampons.

I approached it again and as I descended the lip was blown away by the scene below me! I would have loved to take more time and more photos, but I was shivering and didn’t trust my cold hands so kept moving. As I descended I sent icicles crashing down below me, hoping that none of the larger chunks the rope was resting on would break and hit me.

I yelled down to try and communicate with Jono. I couldn’t really understand what he was saying, but it seemed like he hadn’t got all the way to the bottom. 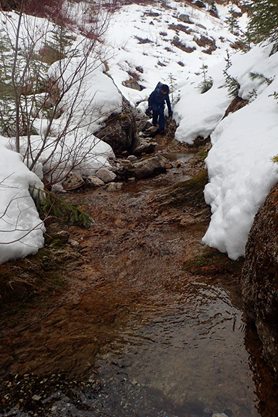 It wasn’t until I was further down that I realised how lucky we’d been. There was a large ice stalagmite about half way down the pitch, which the rope had only just reached, and Jono was sheltered between it and the cliff.

The rock was super chossy, so we pulled out an ice screw and after a failed attempt managed to get a good V-thread in place, backed it up with a screw and continued down the pitch. The pull went smoothly. I was glad to be down. That was probably one of the craziest abseils I’ve done. I couldn’t imagine what Jono was thinking, this was only the third canyon I’d done with him and was thankful that nothing had happened to scare him (and me!) away from the sport.

The canyon opened up here and and there were numerous mini-avalanches coming in from the sides (the danger level was 2-1-1, Mod-Low-Low, when we’d checked before the trip). The canyon is a particularly good terrain trap. 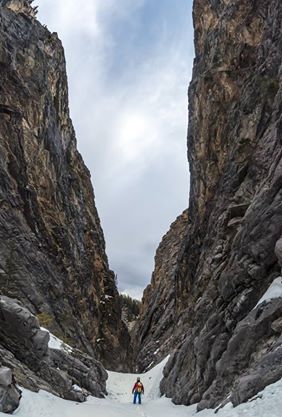 I was pleased to find more ‘snow snails’ which we’d seen in Maligne a few days ago. These seem to form from snow rolling down the slope, often with a rock at the centre to trigger it.

As we continued I was surprised to find a section of the creek flowing.

We then reached the second constriction. The name “The Gates” of the canyon came to mind. 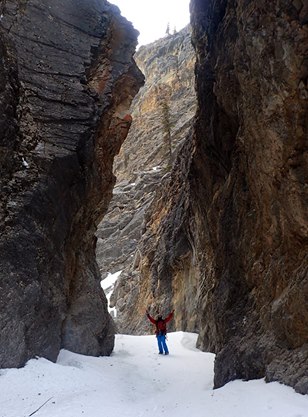 We enjoyed the grandness of the second constriction, the space making us feel quite small.

We had one more final pitch, and noticed our first bolt in the canyon wall. It was completely unnecessary for us as this was just another fun slide!

As we drew to the end of the canyon I was a little confused by a large scattering of fur, feathers, and other bits and pieces. Then I saw the tracks and froze. It was a vacant bear den and the tracks were heading down the canyon. 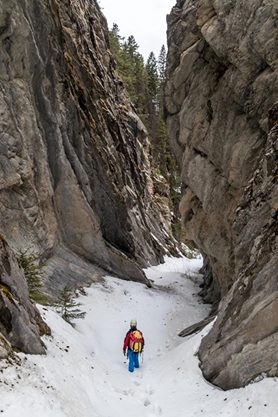 I called Jono closer and we stuck closer together as we followed the bear tracks through the canyon.

They exited just before the final narrows, at the end of which we had another small break, finished our water and pressed on.

We were low on energy now having reached the 12 hour mark. It was around 9pm, the light was fading, and we still had about 8km to get back to the car. 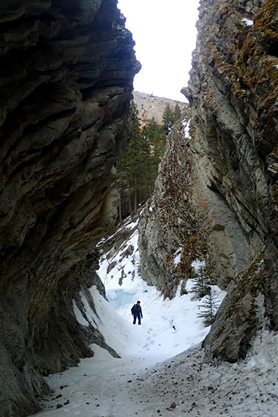 We started out strong, but our remaining energy reserves quickly dwindled and our pace slowed. I made it a challenge to see how far I could go without a light. To be honest I was surprised how dark it was when Jono finally stopped to don his lamp.

I would walk for a bit and then break until I heard him approaching behind me, continue and repeat. The trail seemed to never end.

I finally decided to get my light out. I waited and waited for Jono. I walked a bit down the trail, but I didn’t recognise it: it seemed too narrow. Eventually I worked out that I’d missed the turnoff.

Feeling stupid and regretting not putting my light on earlier, I headed back and found the junction to the bridge. Crouching down, I found Jono’s fresh tracks and hurried after him.

He had five worried minutes before I joined him at the car. What a crazy day and Jono was supposed to work the next day.

We got to Loulou’s Pizzeria minutes before it closed and got some quick take-away. I wolfed it down when I got home, had a shower and crashed. I was going to feel it tomorrow, but was already thinking about the next adventure.