Each time I drive through the Capertee Valley, heading to the canyons around Glen Davis, I look up in awe at the point where the wide open farmland is suddenly constricted between two towering sandstone walls.

While the northern side is part of the continuous cliffs, the southern wall is actually made up of an isolated monolithic plateau called Mt Gundangaroo. Steep, rubble-strewn slopes end at its impressive, impregnable-looking walls. Behind this flat-topped peak runs a ridge to its sister summit, Mt Canobla. While eroded from the same rock, this mountain sits in stark contrast, tapering to a distinctive nipple-shaped peak.

After years of muttering to myself that I really must climb these mountains one day, I finally bit the bullet, picking a cool winter weekend.

Four of us met up in the valley early on the Saturday, leaving our cars at a point that allowed easy access to both our pass up onto Gundangaroo and our return from Canobla the next day. The bush was nice and open as we climbed a spur towards the towering cliffs. Once we reached them, with the sandstone now towering unbroken above, we skirted along to a point where a small creek has cut through the rock, allowing an easy scrambling pass up.

The scrub was thicker once through the creek, but it wasn’t long before we made it to the tops. Here it was possible to walk on remarkably flat ground through nice open forest. Dropping packs we set off to properly explore the cliffs above the north and north-eastern end of the mountain. As well as enjoying the spectacular views of towering escarpments climbing from the green valley below we also stumbled on on old campsite where stones had been arranged into seats overlooking the valley. Once back at the packs we headed south, before dropping into a small creek. On the satellite photos the main creeks on top looked quite interesting, and potentially canyonish. Sure enough, we found some small slots that were quite delightful, but were eventually stopped in both. One required a small abseil into a pool, while the other was quite slippery and steep, and the cool weather didn’t inspire us to get wet.

After this it was off to look for a suitable campsite. We ended up finding some nice flat areas protected from the wind, just a few metres back from the western edge of the mountain. As we set up I realised I’d forgotten to pack our fly, which wouldn’t have been so bad except we’d been watching distant squalls of rain all day. We settled in on some rocks to watch the sunset light up the cliffs and mountains across the valley. At points, the farm dams would twinkle in such a way that the valley looked to be filled with stars.
Our campsite protected us from the howling winds during the night, but the air was still very cold. We were extremely relieved that the rain held off, even if the clearing sky and its display of stars meant the temperature dropped further.

The next morning we decided to go and explore the south-eastern corner of the mountain. Our scrub-bashing efforts were rewarded with scenic views across Canobla Creek. It was one of those views that inspire thoughts of future trips, with exciting-looking ridges and canyoniferous creeks dotting the horizon.

We headed back to the other side of the mountain where I knew there was a pass that would take us down to the gap between the two peaks. The pass itself was lovely and direct, but it was also quite steep and required a few scrambles as well as careful descending of ramps of loose leaf litter. We made it along the narrow ridge then started the climb up Canobla.

This peak is spectacular and unique. It appears as if the mountain is tearing itself apart, with the summit made up of four main sections of rock intersected with slots. Above two of these rock pinnacles balances a large slab of rock that is home to the true summit.

We spent a great deal of time scrambling around, exploring isolated outcrops, finding one of the most romantic camp caves in the Blue Mountains, and generally enjoying the sandstone playground.

Eventually it was time to set off. We followed a steep pass down toward Canobla Gap. It was quite indistinct in places and we each chose varying routes, most involving at least a few scrambles.

At one point, a pack that had been balanced while an awkward scramble was examined decided to overbalance and go tumbling through the bush. It noisily crashed several hundred metres down the steep slope. Amazingly, the contents survived undamaged.

Our walk back to the cars was beautiful, with the late afternoon sun illuminating the cliffs towering above us. This is a truly spectacular area that doesn’t seem to get anywhere near the visitation from bushwalkers that it deserves. 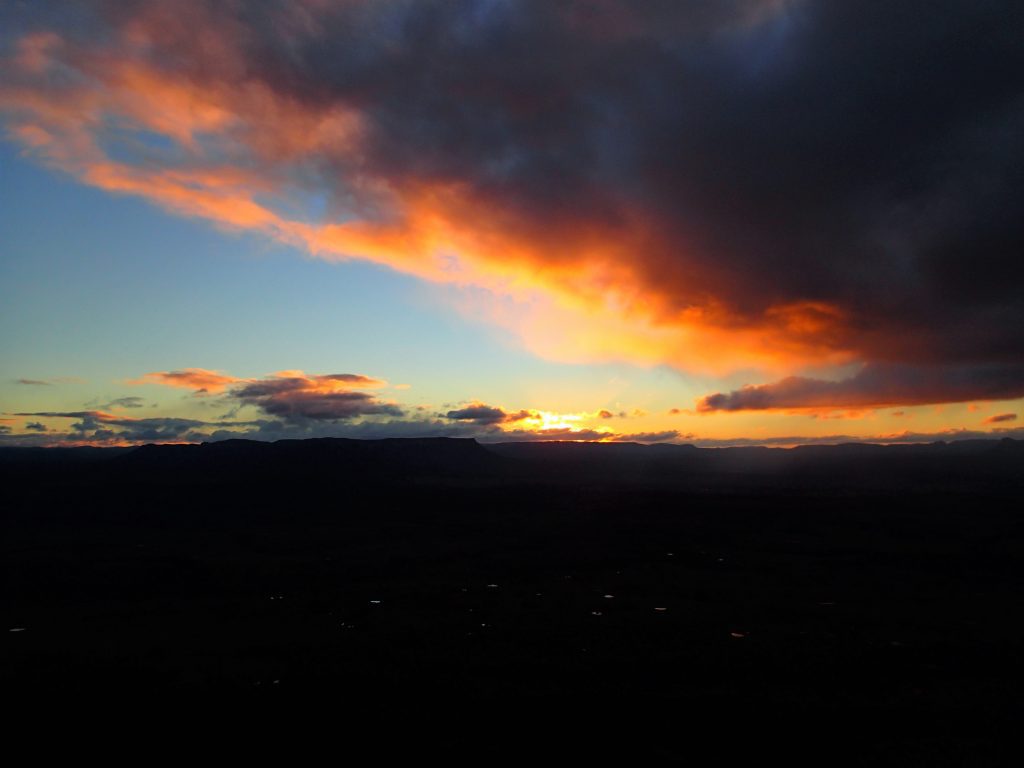