The two SUBW Newnes canyoning trips got merged into one so it ended up being four days of canyoning fun!

David was on night shift until 6am so we opted for a late start to allow for a quick nap, shopping, etc. I was picked up around 11:30 and after packing David’s bags we were off arriving at Newnes at 1(ish).

With gear for four days we headed through the ruins, soon stashing gear beside the Wolgan trail.
Staying on the left we headed up a side valley taking a side creek on the left. Some scrambling saw us through the first cliffline. Continuing up we encountered an awesome overhang… but there was no way up… continuing around to the right we found a ramp with signs of wear that led to a water dragon in a slot. We chimmnied up pushing the lizard reluctantly along. Interestingly it appeared to be avoiding the sunlight. It wasn’t far to the watershed were we descended via several short climbs into the creek that would contain today’s canyon.
The creek had steep earthen sides, but there was no water in sight. As we continued downstream this changed and rainforesty trees sheltered us from the sun allowing us to enjoy the majestic overhangs.
It was perhaps a km before we reached the canyon proper, the sun lighting the eastern wall with a fantastic golden yellow.
The first pitch went through a nasty looking ‘V’shaped crack. Luckily both David and I seemed keen to avoid it and after visually checking the depth a number of times from different angles we eventually plucked up the courage. It was a tricky jump. You had to push of the left wall and land in a deep but narrow pot hole.
The next abseil also turned out to be a jump, this time you needed to jump out quite far in order to avoid a log (make sure you don’t get your foot stuck in the crack when you jump!)
The last abseil also turned out to be a fun jump, after swimming across a deep pool, there was an exhilarating 7-8m jump. We looked up into a narrow side canyon, funnily enough it was with David that I had descended this slot over a year ago.
We passed the tree we had prussiked up last time and after a second water dragon continued down the optional slides and jump-ins.
Happy to have avoided all the abseils we descended back into the valley retrieving our gear for the rest of the trip.

It was still relatively early (4:30?) so we decided to move our camp further downstream and ended up camping on a great beach. We had Smores for dessert – sorry Owen and Sophie 🙁
We also experimented with outrunning flies – there were lots of them!
There where interesting frog croaks and some flashing fireflies!

We broke camp leaving the beach tent pitched with extra gear for the end of the trip.
We headed back up towards the cliffs and quickly located the pass I had discovered on a previous trip. I hadn’t checked that it went so in my head named it Lynchpin Pass… it turns out that luck was with us and we were soon looking down into the valley from the towering cliffs. Following the ridge and compass bearing we bashed upwards through the scrub into the small section that was missing on my laminated map… this bit seemed to drag on for a while, but we where soon reached the landmark we where aiming for and dropping down through the broken cliffs reached the scrubby creek we where looking for (and onto my second map!). After over an hour of pushing down the creek it narrowed into a V shape and soon reached a drop we weren’t going to jump – it was the first abseil of Gladiator Canyon! (and of the trip). We rigged the pitch from a young but sturdy Coachwood and found some old anchors already set up for the next pitch. After some more canyon and a couple of climb downs we reached a pond with a very high yabby density – I counted at least 19 in 3 square meters!
We spent some time watching the yabby powerplay and upset the natural order of things by introducing a bright orange impostor into the mix!
There where also a number of other bugs swimming around; some gliding though the water as if it was a jelly-like substance, propelling themselves forward with long curved oar-like appendages.
Another seemed to be running through the solid liquid.
Another climb took us into some spectacular canyon with a neat little jump-in. I couldn’t decide which of these was better. The creek eventually opened back up and we headed up another canyon I had been up before. We dumped our gear at a camp I had been itching to visit for a night and continued upstream.
We exited early on the right and soon smelt and then saw smoke… slightly concerned we pushed on to the top of the ridge and deciding to break the no-phone rule, managed to get a small amount of reception to have a broken call with my brother to find out if we where in any danger… apparently it was over near the Putty Rd and under control. Yay!

The ridge cleared before we dropped down into another scrubby creek. After a false start we reached the actual start of Flatulence Canyon. There where a couple of short pitches and climb-downs. It got better towards the end.
It was getting late by the time we reached the end of the canyon. Picking up the pace we pushed on reaching our camp just before night set it. We set up camp in the dark.
Custard, Cashews, Couscous – Cooked on our MSR stove to avoid impact.
Also had a number of glowworms as bed-lights 🙂

After watching a beautiful python and discovering the nearby Poop Pass, a lazy Felix finally got sorted. We continued up False Transcription Canyon, negotiating a number of climbs. We passed decent camp overhang as we exited up onto the same ridge. There where some great views from up here.

We dropped into our exit canyon, but entered the system too far down so had to abseil (not climb down some dodgy trees!)
After lunch, we headed upstream to see what we missed. There was one quite tricky climb we just managed to reverse.
By the time we changed our direction it had started raining quite heavily, meaning the clothes I had laid out to dry wouldn’t be any lighter.
Passing several side creeks the floor dropped out from under us and we where soon abseiling into impressively deep canyon. 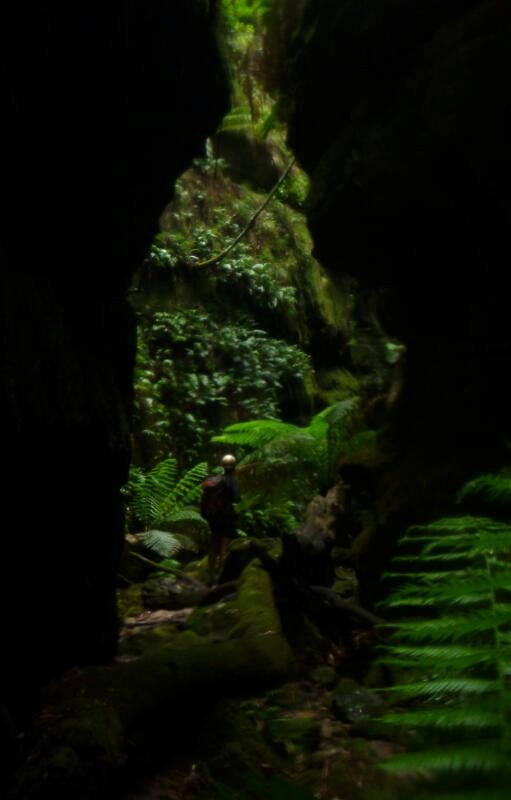 We explored under some boulders in a giant overhang and discovered a secret wetter cave.
The canyon soon opened up into steep rock pile. Heading back down into the valley we found another secret cave, this one home to glowworms. There was also a strange cubic spider web with a thick liquid congealing on the bottom face. We got up a little earlier than the day before. We headed down the Wolgan taking Earth Star Pass up onto the cliffs – I again made the mistake of not carrying enough water.
Whilst walking through the bush I saw an insect get stuck in a spider’s web, we both sat down to watch as the spider raced down to secure its catch. It embraced its prey for a couple of minutes until the legs had stopped struggling. It then proceeded to circle around and around, but didn’t seem to be wrapping up its meal in silk… it instead appeared to be sizing up what it had caught and then broke a couple of strands of web. It then headed up to the leaf at the center of its web, reversing in to spend a couple of moments thinking before returning and again cutting some of the web entangling the dead insect. It repeated this once more, making me think that it was evaluating the integrity of the web before cutting strands. It then used a silk strand as a rope and started hauling its meal up towards its leaf shelter. This took several bouts and required further segments of web to be cut, but in the end it had the insect up within reach of its leaf home.

At the top of the ridge, I led David down a gulley that turned out to be the wrong one in terms of what I was navigating to. It didn’t really matter as it still brought us to the same place and had a number of tricky but fun climbdowns as well as a specky abseil. We had lunch at the bottom. We explored upstream through some lush vegetation (David took his pack! to keep warm) but had to stop at a couple of waterfalls that looked tricky to climb. There was a short section we named Inception Canyon as there was a canyon inside a canyon! We Cooeed a few times in case Katie and Phil where nearby, but we soon headed back to explore downstream. The creek soon plunged downwards and we abseiled of a tree on the side after removing some rope that had camouflaged so well it was nearly invisible. The canyon was still quite open, though we had some slides and jumps and there where some interesting pot hole formations.
The creek then closed back in through some super fun and sporty canyon.
David helped me up a side canyon, but after several short climbs it seemed to be climbing too quickly to have much decent canyon so I returned back down. We then jumped from boulder to boulder slowly weaving a path through the giant boulders. I was surprised to see a decent sized eucalypt growing atop a boulder.
We had a break once we reached the Wolgan and then headed to pack up our camp and commence the road bash back to civilisation.
[youtube https://www.youtube.com/watch?v=agWmSt5oIZg]

Postamble: It turns out Katie and Phil couldn’t find a pass up from their canyon so ended up having a long creek bash and then a long fire trail bash!

One Reply to “Remoteish Newnes Canyoning”