Not many choose to walk to Australia’s highest peak during winter, and rightly so. Large sections of track can suddenly disappear under patches of snow, landmarks become hidden in thick white clouds and almost everything is covered in ice.

“You realise there’s a Canadian still missing up there?” was a phrase Stephen and I heard a lot in the planning stages leading up to the trip. Whether it was the promise of spectacular views or the fifty thousand dollar reward for locating the missing bushwalker, Stephen, Dave and I left Charlottes Pass early, hoping to return well before dark.

The cobblestone path led us through beautiful rolling hills and two river crossings, which I insist were made all the more invigorating by removing one’s shoes first. The boys weren’t convinced, but if you look closely at their faces in the photo, you’ll notice signs of regret, personal disappointment and maybe even fear — as they decided to take the slow, routine rock-hop over slippery, ice-covered stones. Once they finally made it to the other side, we kept walking. The higher we got, the colder and more isolated it became.

At one point, we heard footsteps interrupting some storytelling. Turning around to see a lone bush walker approaching, we welcomed him to join our group. Sebastian could have been a serial killer, or perhaps he intended to keep the $50K all to himself, but to everyone’s relief he turned out to be quite pleasant. Lower down, we had noticed a few people walking in the opposite direction and it soon became clear why — it was as if the track had been erased by a celestial white-out.

Looking to Stephen, the chief navigator, we pressed on behind him towards the Blue Lake Lookout, which ironically, was completely white. Like everything else. 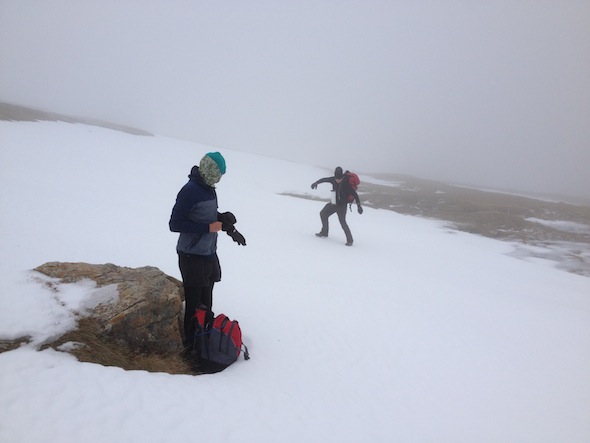 Moving on towards the summit, there were times when I doubted our faithful leader, questioning who we would have to eat first, in the event we got lost.

In spite of the legitimate fear of dying, Sebastian and I had a hilarious time of trying to walk/crawl across snow and ice in runners. Dave and Stephen were slightly more graceful in hiking boots, but with nothing but the threat of buying the first round of beer to hold on to, it was precarious at best. 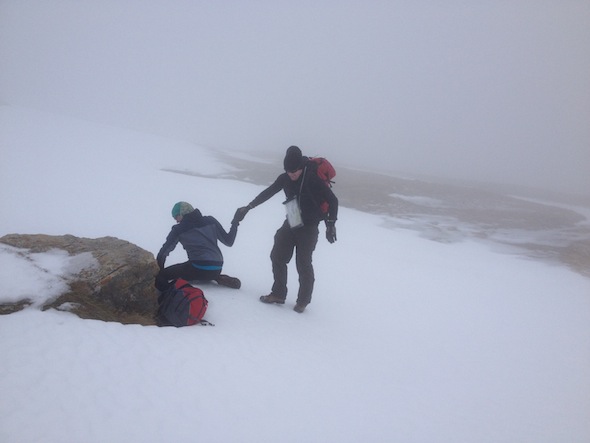 In the moments when the clouds cleared, the views were well and truly breathtaking. For a landscape too inhospitable to grow much more than grass, there was a lot of colour — something the photos don’t really do justice to.

We reached the summit, had our moments being the highest person on the continent and moved on, sliding down the slopes on our shoes. The track out was easy enough, stopping by Seamans Hut for lunch where we read the plaques and discussing the sad tales of loss on the mountain.

It became clear at this stage that we were not going to by claiming any mulah for discovering the location of the poor walker, but we all agreed how easily it could have happened. We got to the cars as the sun was setting and as all good trips end, we met up for an epic feed, this time at the Lake Jindabyne Hotel.

Overall, it was a good day trip made excellent by great company.