Michelle had been nagging me to organise another easy overnight trip after Orange Bluff and given it was my birthday over the weekend I thought it was a perfect time to oblige. It didn’t take much thought to realise Splendour Rock was the perfect trip, providing a lovely high camp site, incredible views, limited ups and downs and less than 10 kilometres each day from Green Gully.

The party of eight, which was pretty good given the short notice of the trip and last minute scramble to get everyone gear, was nearly down two thanks to a train mix up. Guy’s phone rang out and Matt, only in the country for a month, didn’t even have a mobile, so we were already on the road up the mountains when the pair’s later train pulled into Penrith and they called to find out where we all were. A quick U-turn and some ‘aggressive’ driving had me back there in no time and both cars were at Green Gully comfortably before 10am. We set off under a stunning blue sky and an unseasonably warm winter sun, with the short hill straight out of the carpark ensuring we were all comfortably warm.

Having walked to Splendour the conventional way via Mobbs Soak, and via Black Horse Gap, I was keen to incorporate the one spot I had missed, so we set off up Mt Mouin for lunch. A great old track provided easy enough access most of the way before a final push up the steep side to a stunning rocky outcrop. The views from both ends of Mouin are incredible. From the north Breakfast Creek cuts deeply below, the Megalong stretches into the distance, Narrow Neck stands boldly and Solitary and Kedumba glisten in the sun. From the south we could look across the remainder of the day’s walking, with Mts Black Horse, Warrigal, Merrimerrigal and Dingo stretching in front of us, not to mention Cloudmaker and the High Gangerang providing a stunning backdrop.

After a relaxed lunch we experienced a whole range of landscapes. The thin rocky ridge to Black Horse Mountain, the scrub of Black Horse Gap, the shale ledge under the cliffs of Warrigal and several nice little scrambling passes up and down. Given the track is a little fainter, and the terrain a little more interesting, the sun was already getting low by the time we wandered across the unique landscape of the Playground of the Dingoes. We pushed on to Splendour, arriving not long before sunset, giving us time to start setting up and collecting firewood before the last rays of light illuminated the cliffs and filled the eastern sky with rich purples.

A roaring fire and a very generous quantity of alcohol braced us against the chill wind and ensured we were up until late in the evening conversing about as many taboo subjects as we could muster, including the regulars of sex, religion, politics and death. Between the cold, late night, hangovers and rain showers overnight, only four souls braved the 6.20am wake up to head out to Splendour Rock to watch the sun rise. The smattering of clouds in the east took some of the attraction out of it, and I was disappointed to miss out on a low fog in the valleys, but right as we were considering a return to the warmth of the sleeping bags the sun hit the miserable clouds behind us filling the sky with one of the brightest, largest and most complete rainbows I’ve ever seen.

As the sun climbed it became even brighter, with a second rainbow growing around it. Despite our best efforts the photos couldn’t possibly capture the spectacle. After all the fun it was back to bed, avoiding another patch of rain, before people began emerging for breakfast at about 9.30. A quick feed, some more photos, a play around on Thommo’s Chains and a pack up of tents and we were ready to go right as the next patch of bad weather struck, buffeting us with wind and rain as we walked towards the western pass off Mt Dingo.

From here is was a quick stroll to Mobbs where we filled up with water and enjoyed morning tea as the last patch of rain blew over. Despite the cave being a little drab, outside the whole area sparkled as the water droplets on the leaves caught the returning sun.

Finally it was back on the superhighway, making good time through the open forest back to the fire trail. A nice lunch at the old camp site where Breakfast Creek crosses the trail, then it was the final push back to the cars in the mid-afternoon sun.

A quick beer in Katoomba and on the way home before dinner time. Not a bad finish to a great little trip. For those whose German is a little rusty, a quick translation is: “Apparently the group is also very nudist, when the weather warms up, and around the fire you learnt things that one didn’t want to know!” 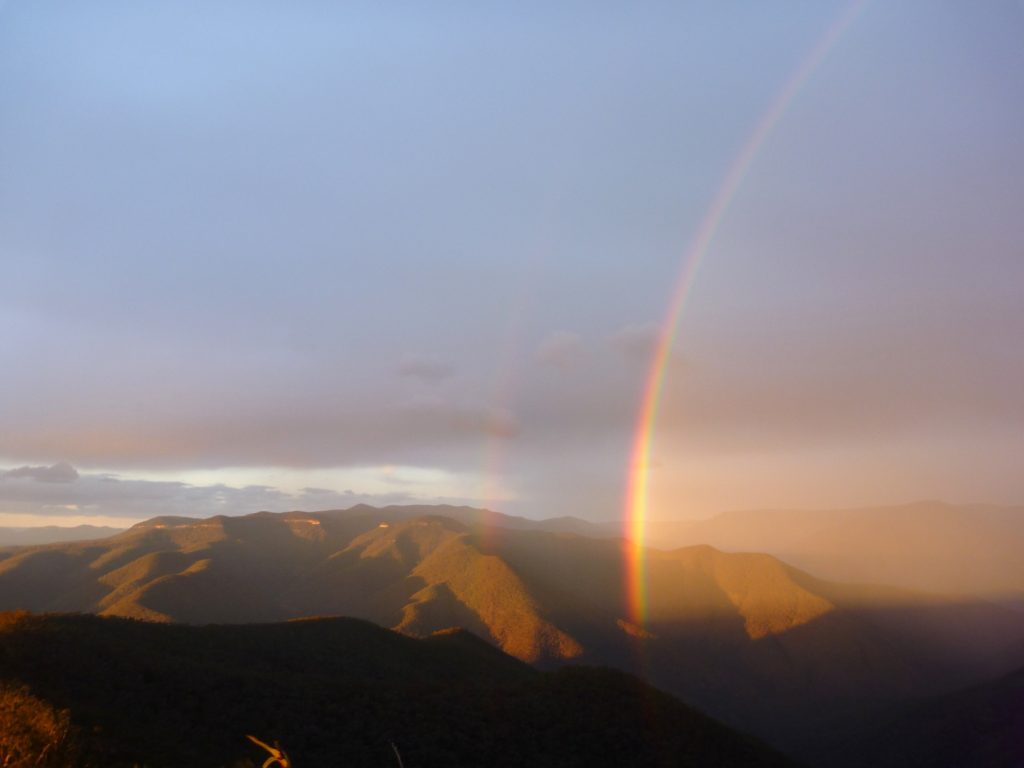